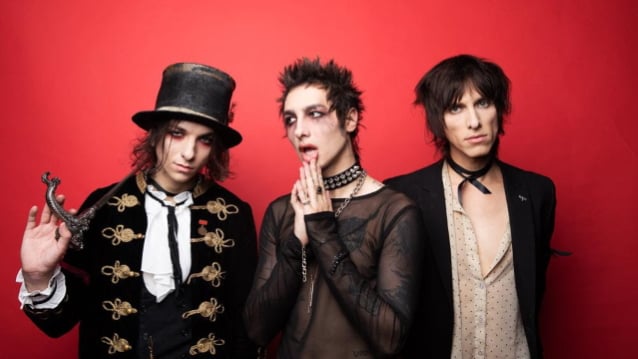 Canadian-American rockers PALAYE ROYALE have released a haunting cover of the TEARS FOR FEARS smash hit "Mad World". Despite the original being released nearly 40 years ago, the timeless content of the song is just as relevant today as it was back in 1982. Now, PALAYE ROYALE has put its own indelible stamp on the classic track, honoring the original version but with an undeniably modern and unique twist.

PALAYE ROYALE released its third studio album titled "The Bastards" back in May. The LP had an incredibly successful first week, hitting No. 1 on both the Alternative Albums and Rock Albums Charts, No. 4 on Independent albums and No. 12 on the Top 200 Alternative Chart. Since its release, "The Bastards" has hit 43 million total streams with 1 million monthly listeners on Spotify. Worldwide, the band has a total of 170 million streams with all albums combined.

Musically, "The Bastards" is an enormous step up for the band. It is, in turn, dark, lush, angry, vulnerable, caustic and warm. From the grandiose Bond-theme-esque "Tonight Is The Night I Die" to the darkly jarring "Anxiety", from the quietly heartbreaking refrain of "Lonely" and the massive fuzzed up, distorted guitars of "Nightmares (Coming Down)" , "The Bastards" demonstrates just how far the band have expanded their writing and musical dexterity, rounding out their already accomplished arson with flourishes of electronics, metal beat-downs, drum n bass beats and haunting string arrangements. There are singles on the album, luminous highlights, but it's also a piece of work that works beautifully when listened to as a whole.

Lyrically, the album addresses a number of important issues, prevalent to today's youth — struggles with mental health, the gun violence epidemic, substance use as a means to escape a difficult reality and parental abandonment all play a part in the album's rich lyrical tapestry.

Speaking about the band's refreshingly honest and open approach to writing on the new album, vocalist Remington Leith says: "We need a little honesty and a little truth. The world is getting so tainted by everyone trying to be so fucking perfect and so goddamn PG and trying to walk this line of not trying to of end anyone. People need to be themselves, just for 20 minutes at least."