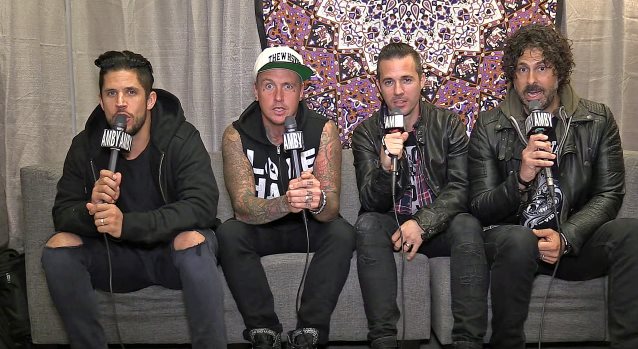 PAPA ROACH Bassist On Upcoming Album: 'This Is The Most Excited We've Been About Music In A Really Long Time'

A Music Blog, Yea? recently conducted an interview with the four members of PAPA ROACH. You can now watch the chat below.

Speaking about the progress of the recording sessions for PAPA ROACH's upcoming album, which is tentatively due in early 2017, bassist Tobin Esperance said: "We are ninety percent done with it, but the last ten percent is very important, and we're excited to finish that, wrap it up. We're super excited."

He continued: "Honestly, this is the most excited we've been about music in a really long time. It's got so much energy and the message… It's an adventurous record, but it's got this… People who are fans of our first record, they're really gonna love this record. We did it different this time too — we worked with some new people that nobody knows, but they're gonna know after this record comes out. It was a different vibe. It was a really, really positive experience."

PAPA ROACH recorded the follow-up to 2015's "F.E.A.R." with Nicholas "Ras" Furlong and Colin "Doc" Brittain at Steakhouse studio in North Hollywood, California, which gave the band a whole different feel. Singer Jacoby Shaddix said: "Well, North Hollywood's just a gnarly little, grimey little town; it's part of Los Angeles the Valley. And we worked out of this studio called the Steakhouse, and it's right in the middle of the funk. You know, there's the ghetto helicopter flying around every night, police chases in the neighborhood, guns popping off. But it's a cool, vibey artist area as well, and so I think that that dynamic really kind of just put us in a different mindframe. Where we've been in a mansion on the top of the highest hill in Los Angeles looking out over the whole city, recording a record at the Paramour, this is the total opposite of that. I think it was important to do that."

Shaddix talked about the lyrical themes covered on the new PAPA ROACH disc, saying: "This one's just about being in the thick of it. When the bullets are all flying around your head and you're in the foxhole, doing the foxhole prayer, like, 'Can I make it out this time?' That's where this record comes from."

Jacoby also confirmed that PAPA ROACH's upcoming disc will signify a stronger return to the rap-style vocals of the band's earlier works. He explained: "I think the edge to this record, lyrically and just sonically for me, just helps identify us as to be originators in a style that's just vicious and it gets people's attention. We know whenever we drop a hip-hop beat at our shows, rocker kids love it. Rock kids try to act like they don't like the hip-hop beat. Yeah, right."

On November 1, PAPA ROACH released a new song called "Crooked Teeth" as a taste of what's to come from the upcoming album. You can stream the track below.