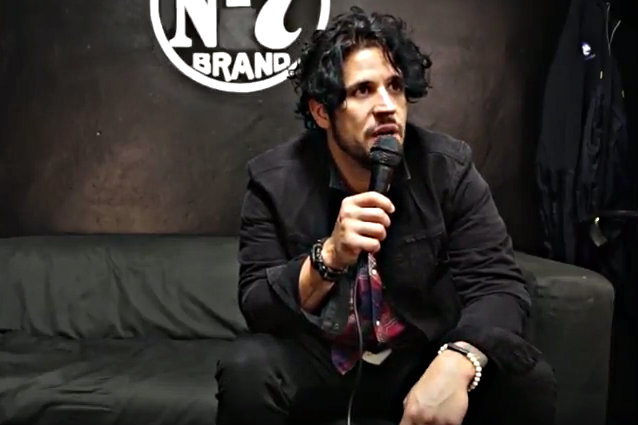 "First and foremost, everybody knows Chris Cornell as just being a humongous voice, an amazing performer, an amazing songwriter," Tobin began. "And all that pain that he's had inside, it comes through in the lyrics and the way he performs and the way he sings it.

"I didn't know Chris personally, but I did know Chester personally very well," he continued. "We kind of came up around the same time, playing shows and touring together. Chester was always a fun-loving, hilariously… and talented person to be around. We had a lot of good times together. We had so many amazing memories.

"There was a long time that we didn't really talk or see each other — maybe because we were just busy with work and family and stuff like that. But it just so happened that we had a big dinner together in New York City, and we had just hung out with Chester about a month and a half before. And I was just so glad just to see his smile again. 'Cause he's such a presence. And he was very happy."

Tobin said that he was "shocked" when he first heard about Chester's death. "It just kind of makes you think, you can't really just read into people… You never know what's going on inside," he noted. "And I know that I've had my share of… I can hide things real easy deep down inside. And I think when you do that and you don't reach out to people and you don't talk about it or get help, it eats you up inside to a point where you just go black and it goes real dark. And I think it's just important that people are not afraid to reach out."

Tobin also talked about the importance of having open conversations normalizing the realities of living with mental health issues. He explained that PAPA ROACH's latest album, "Crooked Teeth", was written as a "metaphor for basically celebrating your flaws, accepting who you are, all your imperfections, all the shit. Everybody's got 'em," he said. "Everyone's got little issues, nobody's perfect — it doesn't matter how rich you are, how poor, it doesn't matter… anything. You just have to share it, talk about it. Don't keep the skeletons in the closet. And 'crooked teeth' was just our metaphor for that. Like, it looks like I have perfect teeth [lifts upper lip to show his upper jaw], but I have a crooked tooth [moves lower lip to show his lower jaw]. See? Who fucking cares? It's awesome, right? That was our way of celebrating all those things and just giving everyone a sense of hope and community."