On August 2, JVC Mobile Entertainment, leading developer and manufacturer of sophisticated mobile, audio, and video products, gave Jacoby Shaddix of PAPA ROACH and Josh Todd of BUCKCHERRY an award to commemorate 2 million views of the "Turn Me On" viral video, backstage at Crüe Fest in San Bernardino, CA.

On May 15, 2008, JVC Mobile released the "Turn Me On" viral video (see below) featuring both platinum-selling artists to promote the El Kameleon DVD/CD receiver on Heavy.com. With media partners Heavy.com, Streetfire.net, and Spin magazine, the ground breaking viral video, created by Danny Klein of agency e2amp, has set new records for co-producers, Heavy.com. Heavy has assisted by providing strategic video placement, front door presence, and custom channeling through their online network of 17 million unique visitors per month, and seeded the video to over 400 lifestyle web sites.

To date the video has delivered more than 25 million media impressions and has a total of 2,653,997 streams, with over 8,300 embeds, making it the most successful viral program Heavy.com has ever delivered. Additionally there have been 73, 911 streams of the behind the scenes and making of video. Both BUCKCHERRY and PAPA ROACH have supported the video by featuring it on their web sites and MySpace pages.

The double platinum plaques were awarded to the artists by Chad Vogelsong, General Manager, Marketing for JVC Mobile Entertainment. "We couldn't be more excited to honor these guys. Their support behind this campaign is appreciated and we're looking forward to another 2 million views," states Vogelsong. 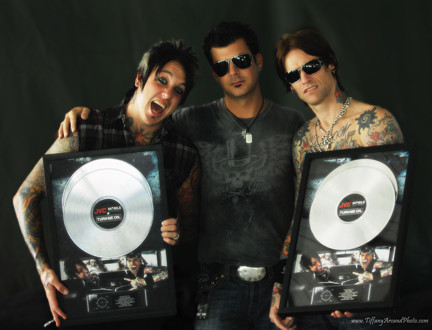