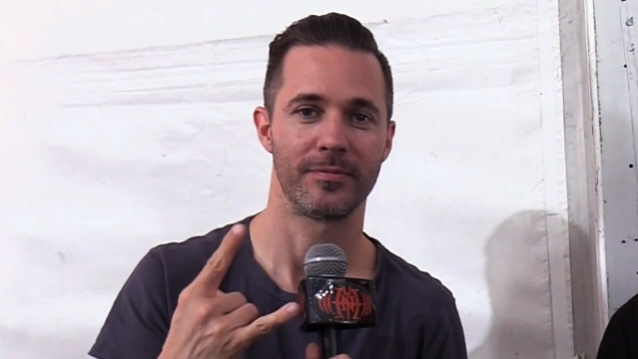 Alex Haber of Heavy New York conducted an interview with PAPA ROACH guitarist Jerry Horton at this year's Sonic Temple festival in Columbus, Ohio. You can watch the entire chat below. A few excerpts follow (transcribed by BLABBERMOUTH.NET).

On whether their latest studio album, "Who Do You Trust?" is meant to stand out in their catalog or stand alongside 2017's "Crooked Teeth":

Jerry: "It's sort of a continuation of the last record. We worked with the same guys that we did the last record with. Some of the songs, actually, started out as songs that we had written for 'Crooked Teeth'. We hadn't finished them; we didn't feel like they were one hundred percent. When we got back in to start 'Who Do You Trust?', we kind of took a new look at them and brought them around to one hundred percent."

On whether each song for PAPA ROACH calls for a "new approach":

Jerry: "Yeah, I mean lately, instead of getting in a room and jamming, we'll actually get together and talk about themes or talk about kind of the vibe that we want and really just hone in on everything before we start actually shedding wood or whatever. Things happen really quick now. Yeah, we have musical ADD. If we're feeling something, we always just go for it, whether somebody might think, 'Oh, I don't know…' We're always of the mind to try it out and see it until kind of becomes work and then if it gets to that point where it's not really happening on its own, we kind of set it aside. But, yeah, we like a lot of different styles of music. We're lucky to have fans that are receptive to different styles and different stuff."

On whether there's an underlying armature to PAPA ROACH's music:

Jerry: "I don't know if it's really a conscious thing. I think that maybe we kind of gravitate toward certain rhythms and certain chord progressions, and maybe, I think lately we've kind of been stepping out of those normal things that we've been doing. But I think you're right: Jacoby's [Shaddix] vocals really tie everything together."

On whether fans having a personal reaction to their music changes the band's perception:

Jerry: "I know that especially for Jacoby, he uses songwriting as therapy and he has a certain intention when he writes his lyrics. But once that's done, it becomes its own entity and it's for people to really take in and view how they sort of are putting the song into themselves. I don't know that it really affects how we write the music, but it's nice to know that people connect with our music on a deeper level than, like, 'That's a cool riff.' It makes us feel good that we're able to be that vehicle for some people that can help them through a hard time."

PAPA ROACH recently confirmed it will celebrate the 20th anniversary of its breakthrough album, "Infest", by playing it in its entirety at a special concert next year.

"Who Do You Trust?" was released in January via Eleven Seven Music.