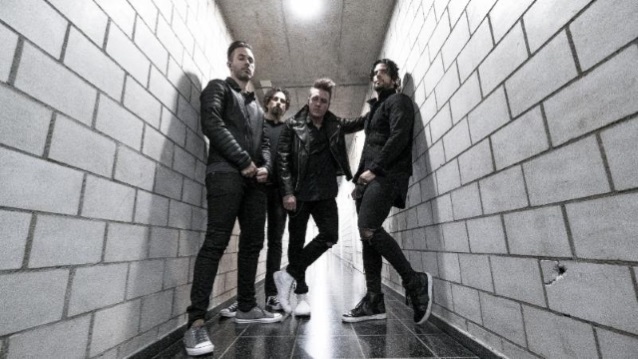 PAPA ROACH frontman Jacoby Shaddix spoke to Andy Hall of the Lazer 103.3 radio station about the progress of the songwriting and recording sessions for the band's follow-up to 2017's "Crooked Teeth" album. He said (hear audio below): "Right when we got done with 'Crooked Teeth', writing and recording that record, we were supposed to go out on tour with OF MICE & MEN, but Austin [Carlile], the singer [of OF MICE & MEN], was really sick at the time. And so instead of going out on tour, we were, like, 'Let's just go back in the studio and start writing.' So we started our first sessions for this album we're working on early last year, and then we went and toured on 'Crooked Teeth', and then we came back and jumped in the studio June and July of this year with all fresh ideas. We have, like, 13 or 14 songs written and recorded, and we feel we have a lot of really great material."

As for the musical direction of the new PAPA ROACH songs, Jacoby said: "I think 'Crooked Teeth' was kind of, like, 'Here's the reintroduction of who P. ROACH is,' and with this new album that we're working on and writing, it really feels like we're making a pretty bold evolution of the band again. And it's a little frightening in a sense at times — like, 'Oh, man. Are people gonna get it?' But then we still have the core sound of the band on the record as well. There's a few songs that we're challenging our fans, like, 'Hey, are you gonna come down this road with us?' And the material we're writing we just feel is just great — it's so inspiring and just unique and different and rocking and anthemic and passionate. It's, like, undeniable.

"I feel like when we wrote the album 'Getting Away With Murder' [2004], it was a pretty bold evolution for the band, especially with a song like 'Scars' at the time for our band," he continued. "Now when you think of 'Scars' and PAPA ROACH, that's like the norm; that's who we are. So I'd say the evolution is comparable to that."

PAPA ROACH is continuing to tour in support of "Crooked Teeth", which was released in May 2017 via Eleven Seven Music. The disc was written and recorded in a cramped North Hollywood studio with producers Nicholas "RAS" Furlong and Colin Brittain, with the exception of "Born For Greatness", which saw the band collaborate with writer/producer Jason Evigan (Jason Derulo, Demi Lovato, Zedd, MAROON 5).