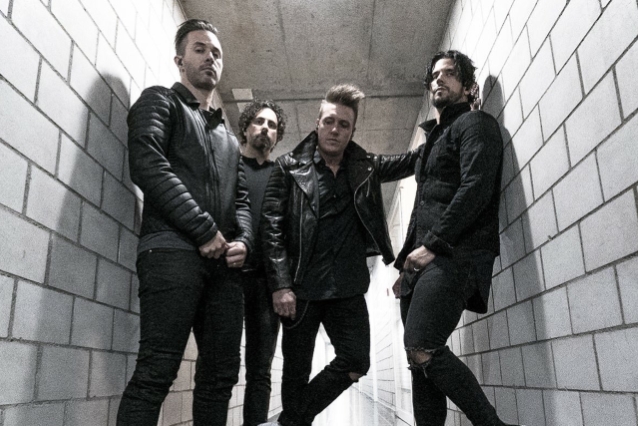 PAPA ROACH's Jerry Horton has revealed to Morgan Richards Interviews that the band is "about 85 percent finished" making the follow-up to last year's "Crooked Teeth" album. The new disc will arrive "either at the end of this year or the beginning of next year," according to the guitarist.

Speaking about how PAPA ROACH's upcoming LP will be a musical progression from "Crooked Teeth", Horton said (see video below): "We're at the point, I think, in our career where we want to… we're really trying to explore more dynamics now and not just be a wall of guitars all the time. So you can do that, but if it's loud all the time, then you don't know when it's supposed to be loud and when it's supposed not to be loud. So we're trying to balance and trying to get some more impact, and I think we started that off really well with [the 'Crooked Teeth' song] 'Help' — and 'Born For Greatness' was another one. We're trying to imagine how it's gonna go [over] live, when we write the song. So that's kind of how 'Born For Greatness' happened, where we were just, like, 'We want something that people can bounce to.' So we're continuing that on the next one. And it's been really good."

PAPA ROACH frontman Jacoby Shaddix recently told the Lazer 103.3 radio station that the band had "13 or 14 songs written and recorded" for the upcoming album. He described the musical direction of the new PAPA ROACH material as "a pretty bold evolution," saying that the tracks that have been laid down so far are "so inspiring and just unique and different and rocking and anthemic and passionate."

"Crooked Teeth" was released in May 2017 via Eleven Seven Music. The disc was written and recorded in a cramped North Hollywood studio with producers Nicholas "RAS" Furlong and Colin Brittain, with the exception of "Born For Greatness", which saw the band collaborate with writer/producer Jason Evigan (Jason Derulo, Demi Lovato, Zedd, MAROON 5).