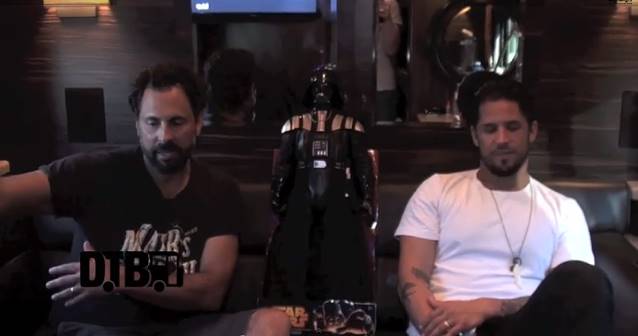 Digital Tour Bus, which gives fans "an all-access pass" to the tour buses that their favorite bands travel in, has posted its latest "Crazy Tour Stories" episode, focusing on PAPA ROACH. The five-minute clip, which was filmed on August 23, 2013 in Tinley Park, Illinois, can be seen below.

PAPA ROACH singer Jacoby Shaddix and his wife, Kelly, are the proud new parents a baby boy, Brixton Gabriel Shaddix. Kelly underwent a Caesarean section procedure a a Californian hospital on September 17 and Brixton was born at 9:45 a.m. local time. He weighed in at 7 pounds and 3 ounces and measured 19 inches long. This is the third son for Jacoby and Kelly, who are also the parents of Makaile Ceilo Shaddix, born March 24, 2002 and Jagger Monroe Shaddix, born September 13, 2004.

During the making of PAPA ROACH's latest album, "The Connection", Shaddix split and reconciled with his wife of 16 years and also fell off the wagon.

"This record is a snapshot of me at my most desperate," Jacoby told The Aquarian Weekly. "As I was writing this record, [my wife and I] were split, so there was a lot of pain and anger and frustration. As the dust settles in my life, I realize that I'm the orchestrator of all this chaos. I'm the one at fault. I'm the fucking problem. When you go through that stuff, sometimes it's hard to own your own shit, to step up to the plate and own it. I just had to because I wanted to do the right thing."

He added: "I was able to make this record, express myself and get my family back together and get my respect from my band. At the eleventh hour, I pulled it off. I don't know, man, this is a repeating cycle in my life. I don't know how many more times I can do this to myself."