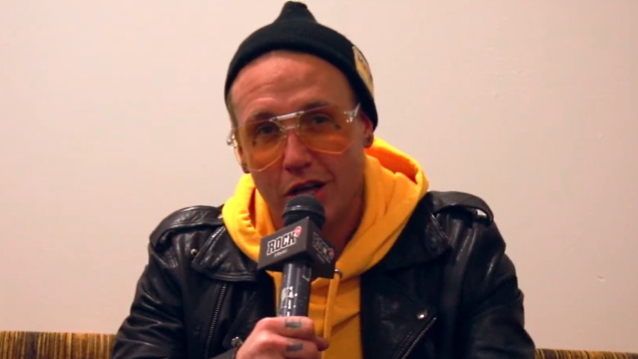 PAPA ROACH guitarist Jerry Horton is sitting out the band's European tour after breaking two fingers in his left hand. His temporary replacement for the trek is Anthony Esperance, the brother of PAPA ROACH bassist Tobin Esperance.

Speaking to Romania's Rock FM on March 3, PAPA ROACH singer Jacoby Shaddix stated about Jerry (see video below): "He broke his fingers. He got surgery. They put eight pins in his finger. So he's actively recovering right now — he's doing physical therapy. It should take five to six weeks for him to recover completely. He had to go in and get surgery, and they had to reconctruct his bone.

"It's a bummer," he continued. "For a guitar player, that's very frightening. [It's] kind of similar in line with what I had to go through — I had a couple of surgeries on my vocal cords throughout my career, and so I know how terrifying that can be.

"But he actually just surprised us — didn't tell anybody in the band, showed up in Munich, Germany to come support us and he came and hung out with the band for a week. And that was really cool. It was good to see him. 'Cause we'd never stepped on stage without Jerry — Jerry's always been the guitar player. But fortunately, we've had Anthony Esperance, Tobin, our bass player's younger brother, he's been out touring with us, playing back-up guitar, keyboards, percussion and backing vocals. And so we just were, like, 'Hey, man, it's time to step up to the front of the stage for this tour.' And he's doing a great job."

Asked how the fans have responded to Anthony's addition to PAPA ROACH's touring lineup, Jacoby said: "So far it's been great. They're very welcoming to Anthony, and Anthony is doing a great job. Trying to fill Jerry Horton's shoes, those are big shoes to fill. But he's doing a great job. And it's cool that we were able to continue the tour, 'cause we were on the phone talking about this, 'Fuck! What are we gonna do?' And Jerry was, like, 'Guys, we've gotta make this tour happen. We've gotta find somebody to just come fill in.' And that was the general consensus of the band. So we're out here doing it, and we're having some of the best shows of our career, as far as attendance and people coming out. Jerry came out and got to witness some of it, and he was, like, 'Man, I wish I could be part of this.' It's tough for him. But Freddie Mercury from QUEEN said, 'The show must go on.' So, the show must go on."

PAPA ROACH's European tour with HOLLYWOOD UNDEAD and ICE NINE KILLS kicked off in Barcelona, Spain on February 16 and will conclude on March 18 in Copenhagen, Denmark.

PAPA ROACH is continuing to tour in support of its tenth studio album, "Who Do You Trust?", which was released last year via Eleven Seven Music.

PAPA ROACH was recently announced as one of the opening bands for FIVE FINGER DEATH PUNCH's spring North American tour. The trek kicks off on April 8 in Sunrise, Florida, winding down on May 20 in St. Paul, Minnesota.