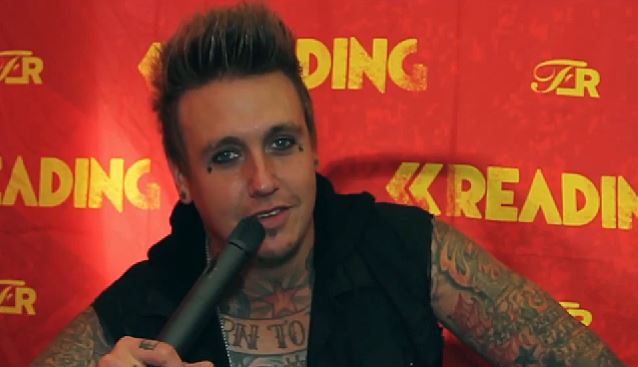 Hit The Floor magazine sat down with Jacoby Shaddix of PAPA ROACH at last month's Reading festival in England to give him the "HTF Firsts" treatment. Jacoby talked about kissing his uncle, the demise of Banooch the dog, and why he decided to smash his back into a nail. Check out the clip below.

On his first kiss:

Jacoby: "My first kiss was when my uncle kissed me and he gave me herpes. It was terrible. Anybody else got herpes? Yeah, you do. Don't lie to yourself. I know you got it, you watching this."

On what message he has for his fans:

Jacoby: "If I've got a message to my fans, it's go be yourself. You know what I'm saying? No matter what's going on out there in the world, believe in yourself and go be yourself, because that's what the world wants from you — is you to be you, and not you to be a copy of somebody else. You know what I'm saying? That's what P-ROACH is about. We're just us. We're not trying to emulate somebody else or something else. Be yourself and be proud."

As previously reported, Jacoby Shaddix will co-direct the video for PAPA ROACH's new single, the title track of its eighth studio album "F.E.A.R. (Face Everything And Rise)", which will come out in early 2015.