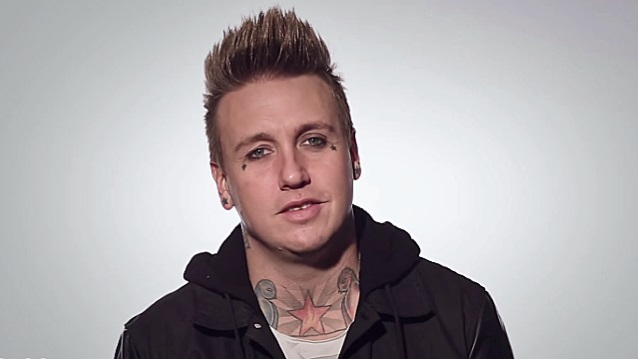 Dave "Higgo" Higgins, formerly of Australia's long-running rock station Triple M, conducted an interview with PAPA ROACH singer Jacoby Shaddix and guitarist Jerry Horton during this year's Soundwave festival. You can now listen to the chat in the YouTube clip below.

Speaking about the current state of rock music, Shaddix said: "I feel it coming back pretty strong, man. There's the contingent of bands that have stuck around through it all, like KORN, P-ROACH, DEFTONES, INCUBUS… And then there's this new wave of younger, heavier bands that's coming up — OF MICE & MEN, BRING ME THE HORIZON, WE CAME AS ROMANS… a lot of these younger kids that are… FALLING IN REVERSE, ESCAPE THE FATE… [They are coming out] with this fresh, new rock sound, but these were the kids that were listening to PAPA ROACH, KORN and DEFTONES and INCUBUS when they were kids. And so there's kindred spirits between our bands, because they're, like, 'Yo, dude, you guys inspired us back in the day.' And we're looking at these bands, going, 'You guys are inspiring us now.' 'Cause there's similarities in the vibe and the music and the groove and the bounce and stuff like that."

He continued: "I definitely feel there's a resurgence in rock. And give it another five years, and it's gonna be the biggest thing on the planet again.

"Everything's cyclical, dude, and we've survived through a few of the phases… What have seen come and go? The garage-rock revolution. Before garage rock, emo, scream… Then what was the next thing? Average-white-guy rock. You know what I'm saying. Average-white-guy rock came in and it kind of [ended up] going away. And so now we kind of see this resurgence of heavier-sounding bands. It's, like, cool. It's exciting."

PAPA ROACH's new album, "F.E.A.R.", was recorded in Las Vegas, taking the band out of their Sacramento, California home base for the first time since 2006.

Shaddix told The Pulse Of Radio that he wasn't very happy at first about going to Sin City to record. "I ended up in this city where I've had some of my greatest failures and worst decision making, and some of my biggest debacles of my life happened in Vegas, you know," he said. "And I believe I was sent back to that city to go do right this time, and we went there and I just faced that fear of living in this city that I felt was gonna eat me alive. But really and truly I just gave myself to this music 100 percent, and that's what pulled me through."

PAPA ROACH and SEETHER recently teamed up for a co-headlining North American tour that kicked off on January 9 in Orlando, Florida and wrapped on February 7 in Las Vegas.