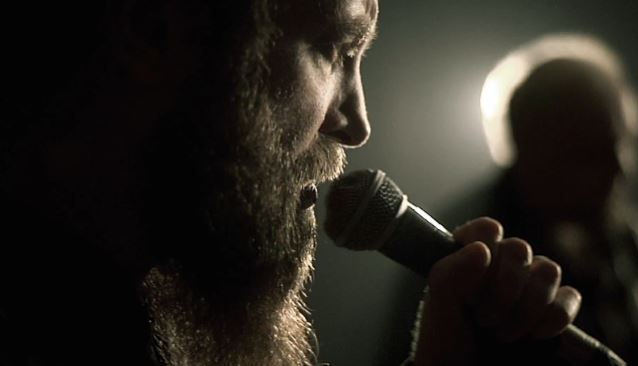 "Beneath Broken Earth", the new video from British gothic metal pioneers PARADISE LOST, can be seen below. The clip was directed by Ash Pears of AshTV Music Video.

Comments PARADISE LOST guitarist Greg Mackintosh: "I fucking hate metal band performance videos, so when I got told that we needed to do one, I was obviously annoyed but then came the idea to do a performance video of utter misery. The slowest song we have ever recorded.

"'Beneath Broken Earth' is utter, old-school PARADISE LOST doom/death song and doing a performance video with our miserable, old faces barely moving in a crappy, old basement was too much to resist.

"The director Ash has done a great job of capturing the sombre mood and has managed to make a performance video we can actually be proud of."

"Beneath Broken Earth" is taken from PARADISE LOST's new album, "The Plague Within", which will be released on June 2 (one day earlier internationally) via Century Media. The CD was recorded at Orgone Studios (GHOST, ULVER, CATHEDRAL, ANGEL WITCH) in London with producer Jaime Gomez Arellano.

The official lyric video for the PARADISE LOST track "No Hope In Sight", taken from "The Plague Within", can be seen below. The band comments: "'No Hope In Sight' was one of the first tracks we wrote and it reflects a blend of styles. From death metal to gothic to classic rock. It's like all eras of PARADISE LOST wrapped up into one track. We hope you all like it!"

Regarding the musical direction of "The Plague Within", Mackintosh told U.K.'s Total Guitar magazine: "It could be a bit of a Marmite album. Sometimes it's nice to do albums that are expected, in a way, but for a career like ours, it's important to do certain records and songs where you try something else.

"A certain track, like 'Flesh From Bone', is probably the fastest song we've done tempo-wise," he revealed, "while 'Beneath Broken Earth' is quite possibly the slowest.

"We weren't shying away from any period," he continued. "But it also had to be cohesive."

Greg added: "As it came together, the death metal elements became more prevalent, so the album ended up with more of those elements than we'd first anticipated. But it's got a good ebb and flow to it.

"We deliberately went down a different route, where we want it to sound like no one else in metal. Whether we've achieved that, I have no idea until everyone hears it."