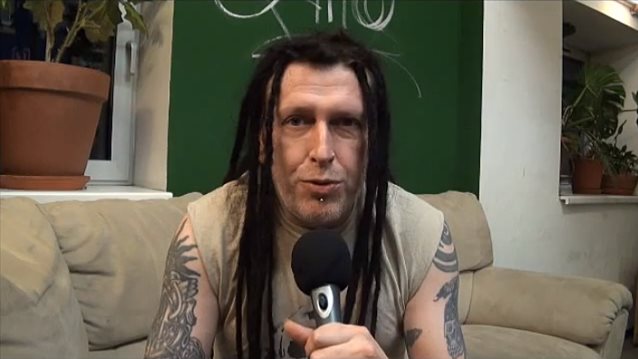 Planet Music Vienna conducted an interview with guitarist Greg Mackintosh of British gothic metal pioneers PARADISE LOST prior to the band's November 12 concert at Arena in Vienna, Austria. You can now watch the chat below.

PARADISE LOST has just completed its 25th-anniversary "Tragic Illusion" tour with support from LACUNA COIL and KATATONIA (who played the entire "Viva Emptiness" album at the shows).

From the harrowing doom of their 1990 debut, "Lost Paradise", to 1991's genre-defining "Gothic", to 1995's break-out masterpiece "Draconian Times", to 1997's electronically tinged "One Second", to 2007's return to a heavier form "In Requiem", to last year's opus "Tragic Idol", PARADISE LOST have continued to evolve since their inception in 1988, inspiring countless artists throughout the years. To celebrate their influence on the scene, a special compilation was released to commemorate the band's 25th-anniversary landmark.

Entitled "Tragic Illusion 25 (The Rarities)" , this album was issued on October 21 in Europe (digitally on October 29 in North America) and features artwork by Parisian designer Valnoir, who has worked with artists such as ORPHANED LAND, MORBID ANGEL, WATAIN, and more than 150 others. All tracks found on the compilation are previously released rarities — except the new track "Loneliness Remains", and newly recorded "Gothic 2013" and "Our Saviour 2013".