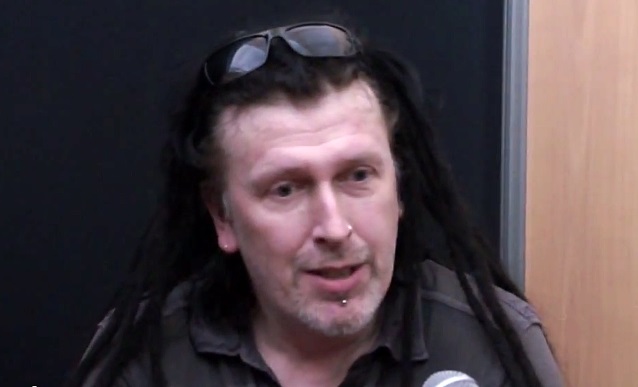 PARADISE LOST's GREG MACKINTOSH: 'There Is No Money' In The Music Industry Anymore

Metal Road conducted an interview with guitarist Greg Mackintosh of British gothic metal pioneers PARADISE LOST at this year's Hellfest, which was held June 20-22 in Clisson, France. You can now watch the chat below.

On how the Internet and digital music revolution has affected the music industry:

Greg: "It's kind of killed it a little bit, because there is no money for the industry. I don't mean for the bands — I mean, just in the industry, there's no money — so there's not as much for tour support, things like that, or promotion, so everyone kind of has to do extra things which you wouldn't normally want to do. Even just like the packaging of an album, you have to do 20 different formats just to try to sell it to people. It leaves a bit of a sour taste in my mouth. We started in the music scene when it was more honest, shall we say?! But, I mean, there's plus points to the way it is now. People get to hear things faster, people get to promote things instantly. We don't have to rehearse as much, 'cause we just send each other things over the Internet."

Greg: "It's just the typical heavy metal 'Spinal Tap' thing; you just can't keep a drummer, they just keep disappearing. The first drummer would still be in the band if he could drum better, but just as we got bigger, he couldn't keep up, if you know what I mean?! So he would probably still be in the band if that were the case, 'cause we're still relaly good friends. And the second drummer just went insane and turned to God. So he's kind of into God now. And the next drummer had kids and got married. And now we have Adrian Erlandsson, who is in, I think, probably most bands that are playing today, probably, I don't know. He's in a lot of bands. But Adrian is cool. We try and hold on to people. It's just that, over the years… It's not for everyone, this kind of life. It's a strange life."

On the progress of the songwriting sessions for the follow-up to 2012's "Tragic Idol":

Greg: "We're writing a new record at the minute. I think we've got about eight tracks done; we're gonna write maybe another four. So we'll get in the studio maybe October or November. Maybe November. And then the whole thing starts."

PARADISE LOST will perform with an orchestra on September 20 at the Roman theatre in Plovdiv, Bulgaria. For the one-off concert, the band will be joined by the renowned Plovdiv Philharmonic Orchestra founded nearly 70 years ago and made up of over 100 highly qualified musicians. The orchestra has its roots in the hundred year old orchestral tradition in Plovdiv and over the years has launched the careers of many world-famous conductors.