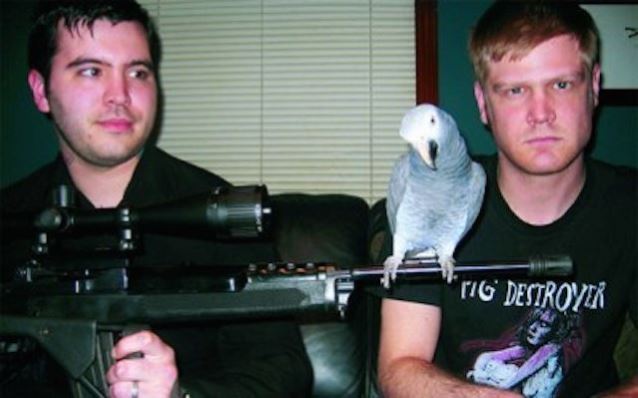 The world's most infamous death-metal/grindcore band fronted by a parrot is back! Reptilian Records has announced that the label's 100th release will be none other than HATEBEAK's "Number Of The Beak", due on June 26.

This monolithic release, which is beautifully mastered by Scott Hull (PIG DESTROYER, AGORAPHOBIC NOSEBLEED) Will be issued on CD, cassette, as well as limited vinyl runs (including 300 on a special "Bird Shit" black/white/clear color mix). Featuring a sure-to-be controversial cover by artist Stephen Kasner, one side of the vinyl collects all of HATEBEAK's long out-of-print EPs from 2004-2007 while the other side features six never-released songs, the first new avian-metal to surface in eight years!

A previously unreleased song, "Seven Perches", which is featured on "Number Of The Beak", can be streamed using the SoundCloud widget below.

Check out audio samples at ReptilianRecords.com.

HATEBEAK formed in Baltimore, Maryland in 2003. During their initial existence, they were a studio project shrouded in mystery. In recent years it has become public knowledge that HATEBEAK was the brainchild of Blake Harrison (who is now in PIG DESTROYER) with Mark Sloan (THE INDEX) and Waldo, a 21-year-old African grey parrot. Within months, the first HATEBEAK recording, "Beak Of Putrefaction", surfaced on Reptilian Records.

The public reception quickly went from metal underground oddity to national news as programs like "The Howard Stern Show" and outlets like The A.V. Club covered the band. The band's logo was a parody of the HATEBREED logo, and the single cover was a blatant rip-off of JUDAS PRIEST's "Screaming for Vengeance", which quickly earned a cease-and-desist order and was reissued with Waldo obscuring most of the original picture. Refusing to perform publicly for fear of traumatizing Waldo, the human members went on to other projects while Waldo went on to do album reviews for Decibel magazine, so HATEBEAK went underground until the time was right. Now, as The A.V. Club summed it up, "Parrots have long been relegated to menial communication: echoing sentiments about popcorn and crackers or, at best, doing adorable covers of other people’s terrible music. But now it is the parrot’s time to shine!" 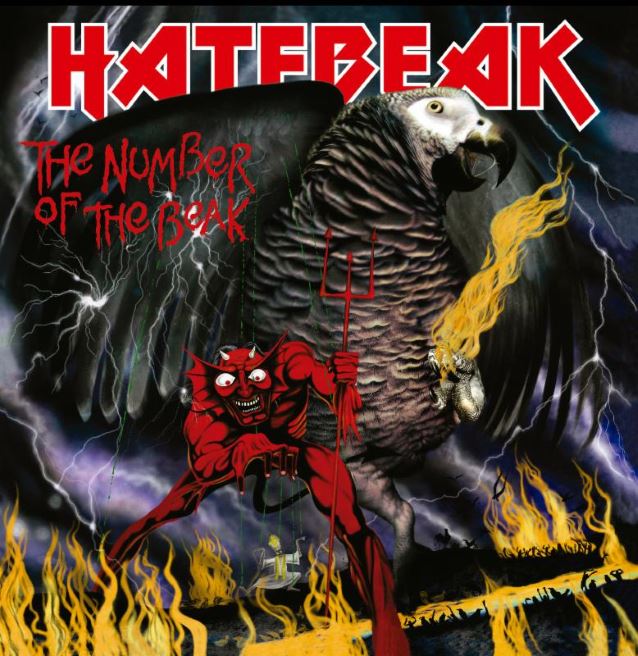