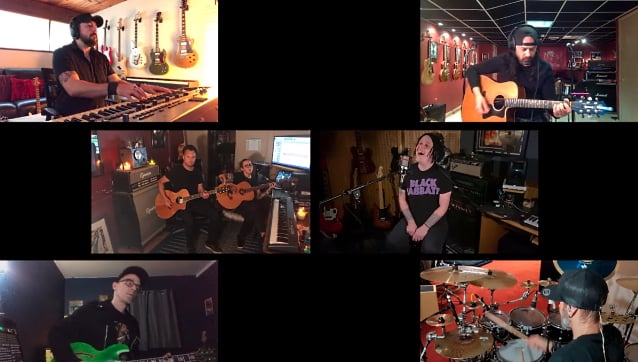 According to Coyle, the video was inspired by similar "quarantine-style" performances that he had been watching online and on TV and, already thinking about doing a duo acoustic version with Lenardo, he decided to enlist additional friends and musicians to "have a little fun with it."

"I've always loved 'Take A Picture' and was originally thinking of doing a duo acoustic version with just me and Geno of FILTER," said Coyle. "Lindsay, our bassist in COLD, is staying with Geno during this lockdown and wanted to be a part of it too so then I thought... who else do I know that would be into playing on this? So, I reached out to Chad to see if he wanted to play drums, hit up my guitarist in LIFER Aaron to play keyboards and my old friend Brian Quinn from CANDLEBOX to play acoustic guitar. And then I asked my good friend and bandmate in COLD Johnny Nova to play electric guitar. Luckily, everyone was into it and excited to be a part of it. I am grateful that these guys, and gal, wanted to be a part of my crazy vision."

Both COLD and CANDLEBOX were scheduled to head out on extensive tours starting this month, but both were postponed due to COVID-19.

COLD has been supporting its latest release, "The Things We Can't Stop", while CANDLEBOX is preparing to issue a new album later this year.