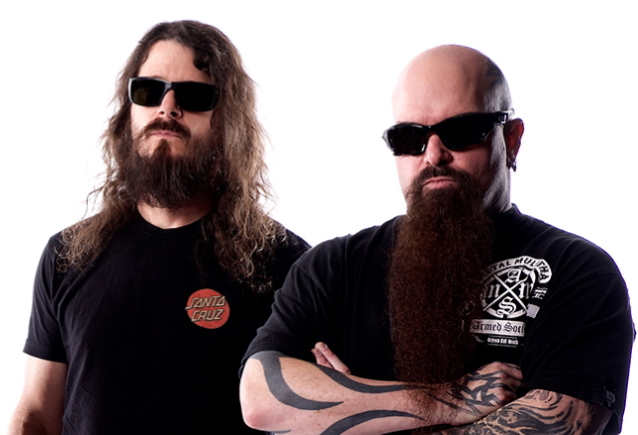 Paul Bostaph has confimed that he is involved in a brand new project headed up by his SLAYER bandmate Kerry King. The duo has spent the last few months working on music with the hopes of recording it properly once the coronavirus pandemic has subsided.

The drummer opened up about his latest collaboration with King in a brand new interview with Australia's Riff Crew.

Asked to describe the musical direction of the music he has been working on with the founding SLAYER guitarist, Bostaph said (see video below): "I guess the best way to put it is Kerry writes what he writes. Is this gonna be a rock and roll record? No. Is it gonna be what you want it to be? Yes. Is it gonna be what you expect it to be? Yes. It's not gonna be some rehashed stuff… It's gonna sound like SLAYER without it being SLAYER — but not intentionally so. I mean, Kerry's been writing songs in SLAYER his entire career, and he has a style. And that style, as a songwriter, you just don't change your style because your band is done. But that's what you love to write.

"Are things gonna maybe morph over time? Yeah. I would imagine so," he continued. "I don't think the first song Kerry wrote as a kid is the same as the last song he wrote for [SLAYER's final album, 2015's] 'Repentless'. Songwriters do change over time based on their influences and how they feel at the time.

"Kerry's on fire right now. So, all I can say is if you like heavy music and you like SLAYER, you'll like this. Is it gonna be SLAYER? It's not gonna be SLAYER — SLAYER is done; they retired…

"The thing about it is that we don't wanna sound like 'Baby SLAYER,' you know what I mean?" he added. "There is SLAYER. But it's gonna be good — it's gonna be really good. I've been listening to the music and I just cannot wait to get into the room and start jamming with Kerry.

"Part of it for me is that I don't have to… And this is not an insult; it's definitely a compliment… I don't have to drum under the show of [original SLAYER drummer] Dave's [Lombardo] drumming badassery. That's a good thing to do, but I might be able to stretch out a little bit and do some things that I like to do and still make it fit within the framework of what we're doing. I'm looking forward to trying some things that I've wanted to try within SLAYER but couldn't, just because I didn't have it developed well enough. And we'll see if I can make some of that stick in some of the new music."

Asked if his songwriting approach with King has changed compared to how it was within the confines of SLAYER, Bostaph said: "Right now, the formula's gonna be the same. I know how Kerry writes.

"When I first joined SLAYER, before we did [1994's] 'Divine Intervention', Kerry and I were roommates, and we barely knew each other," he explained. "And we spent a lot of time together, on a friendship level and jamming musically. I know what he wants out of a song, and we have that formula, and it's a good formula that works, and we're not gonna change it. If it's not broke, don't fix it. You know what I mean?"

Earlier in the week, Kerry told Dean Guitars that he had plenty of musical ideas for his upcoming project. "I've been very, very lucky with riffs in 2020," he said. "Maybe because I can't go anywhere — I don't know — but riffs have certainly not been a problem. And looking forward into the future, what that means for me is I'm gonna be able to cherrypick the best stuff. And it's good stuff. I've got more than two records' worth of music, but to be able to go through that and cherrypick the best 11 or 12 [songs]… That first record should be smoking."

According to Kerry, who recently partnered with Dean Guitars as a signature artist, most of the songwriting for his next project so far has been a solitary effort.

"Right now, I'm the only lyricist, because I'm the only one writing music, because I'm not positive who everybody is that's gonna be playing with me," he said. "So it's all on me at the moment. So, actually, I've actually gotta cherrypick those songs, pick my 10 or 12 favorites and actually start trying to put lyrics on them, just to move the process forward."

SLAYER played the final show of its farewell tour last November at the Forum in Los Angeles. One day later, Kerry's wife, Ayesha King, said that there is "not a chance in hell" that the thrash metal icons will reunite for more live appearances.

Riff Crew is a new media outlet servicing music lovers across the globe. It was launched by Australian metal radio veteran and ex-Triple J radio host Andrew Haug, along with videographer Steven Mitchell. The outlet will feature in-depth interviews, commentary and exclusive live multi-cam footage of some of the finest metal, punk, hardcore and rock bands in the world.