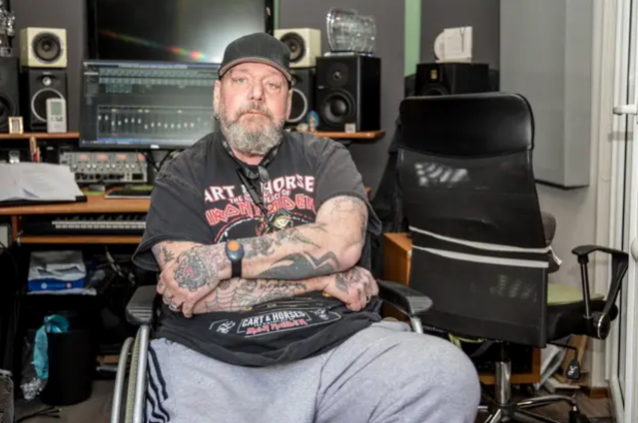 Former IRON MAIDEN frontman Paul Di'Anno, who has been receiving physiotherapy and lymphatic drainage treatments in Zagreb, Croatia in preparation for his upcoming knee surgery, has teamed up with several Croatian musicians to form a new project called WARHORSE. WARHORSE recently entered the studio to record three songs, two of which — "Stop The War" and "The Doubt Within" — were released in May as a special DVD single along with Paul's video message to all fans who bought the single and thus helped raise funds for his upcoming operation.

Earlier today, WARHORSE released the music video for "Stop The War". The clip, which was preceded by video announcement and an interview of the whole band, was premiered on the Ukrainian YouTube channel Metal Pilgrim hosted by Vladyslav Stadnyk.

The WARHORSE single is Di'Anno's first music release after a seven-year hiatus due to severe health issues. The band was formed by Di'Anno and two guitarists/authors, Hrvoje Madiraca and Ante "Pupi" Pupačić.

"Stop The War" features a universal and very clear message. This fierce, direct and brutally honest song was created as a direct consequence of the tragic events in Ukraine, but its message refers to all wars, the meaninglessness of the suffering and suffering of the innocent.

The release date of this video is significant, because it marks Constitution Day in Ukraine, and WARHORSE wants to say that there will always be support for the helpless and those who are suffering, in their loud and fierce way so that the whole world can hear the message well.

Behind the suggestive video, which is a combination of lyrics videos and WARHORSE studio recordings, stands the WARHORSE team and fantastic video producer Andy Pilkington, who has made great lyric videos, among others for JUDAS PRIEST and SMITH & KOTZEN.

WARHORSE plans to record an entire album in a very short period of time, so that they can announce their first performances in the summer of 2023.

WARHORSE released 666 bundles containing the DVD single and event t-shirt from Paul's comeback concert in Zagreb as part of a pre-sale and in less than two months almost all of them were sold out. Some of the last remaining signed copies are available from www.maidencroatia.com/warhorse.

Earlier in the month, Stjepan Juras, a MAIDEN fan and author of many MAIDEN-related books, who is taking care of Paul while he has been in Croatia, revealed on Facebook that the 64-year-old singer will undergo three operations over two days in July. The procedures will be followed by a period of hospital recovery, intensive care and rehabilitation, including re-learning of walking. If all goes well, Paul should be able to walk fully by the end of 2022. However, if the set of treatments fails, then a leg amputation will be the only option.

Last month, Di'Anno came face to face with MAIDEN bassist Steve Harris for the first time in three decades before the band's concert in Croatia.

Last month, Paul played his first full solo concert in seven years at the Bikers Beer Factory in Zagreb. The show was filmed and parts of it will be included in a documentary about Di'Anno, to be directed by Wes Orshoski, co-director and producer of the acclaimed 2010 film "Lemmy" about the MOTÖRHEAD icon.