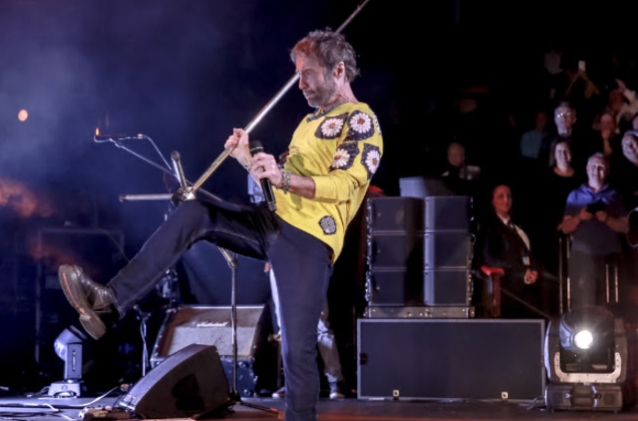 Legendary vocalist Paul Rodgers spoke to SiriusXM's "Trunk Nation" about his experience fronting QUEEN between 2004 and 2009.

"Well, it was a wild ride, I'll tell you," he said (hear audio below). "And it came out of the blue. When Brian [May, QUEEN guitarist] asked me if I wanted to do a couple of shows just for fun in Europe, I was pretty taken aback. And I must say my first reaction was, 'Well, I really don't see that.' But then I said to myself, 'Well, it's a challenge. Let me see if I can do it. Maybe I'm chickening out here.' So I did it. And it turned into four years, actually. We toured all over the place. We toured the world twice, and we finished off with a studio album of all-original material. So it was a wild and crazy ride, as they say. And we are still friends, and I love the guys."

With Rodgers at the mic, QUEEN embarked on two world tours and released an album, "The Cosmos Rocks", in 2008. They amicably parted ways a year later when Rodgers returned to BAD COMPANY.

"When I sort of joined forces with [QUEEN], they were not touring," Rodgers recalled. "They were doing one-off gigs — they were big one-off gigs, but they weren't touring. And with me, what we did [is] we went out… They wanted to play 50 percent of their music and 50 percent of mine, and I said to them, 'People haven't seen QUEEN live for a long time. We should make it QUEEN heavy.' So we did four or five of my songs… But it was great. It was good."

Rodgers has said in previous interviews that he performed all of the QUEEN songs in the late Freddie Mercury's original keys. "A lot of people drop the keys," Paul said. "But, to me, the challenge was to do this material the way it was done, but in my interpretation of it."

In a 2014 interview with the Toronto Sun, May and drummer Roger Taylor admitted that their collaboration with Lambert is a better fit than their previous involvement with Rodgers.

"Paul has one of the greatest rock voices but it's more blues- and soul-orientated I would have thought," Taylor told the Toronto Sun. "I would say, with all due respect to Paul, that Adam is more suited to a lot of our material and whereas we had great tours with Paul, I think Adam is more naturally at home with us." May concurred and added that Lambert's remarkable range and flamboyant stage presence are much more in line with those of Mercury. "Yeah, I think the styles match more closely in a sense," May said. "But we had a great time with Paul, no doubt about it, and it kind of stretched it to a new place and, I think, a thoroughly good experience. But Adam is really… Like us, he has many, many colors, so we can explore some of those strange excursions that QUEEN likes to."