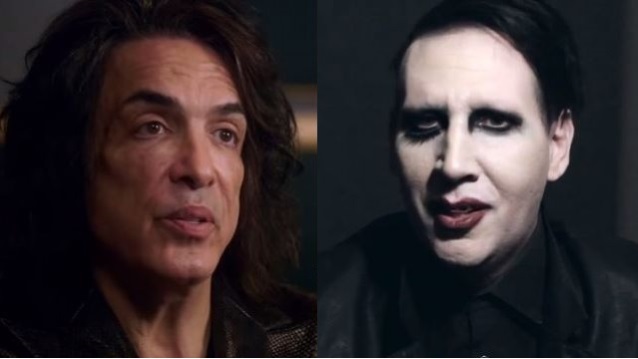 KISS frontman Paul Stanley has accused Marilyn Manson of trying to get publicity by connecting himself to the death of Charles Manson.

Earlier today, Marilyn Manson tweeted a link to a YouTube clip of his previously recorded cover version of the mass murderer's 1970 track "Sick City". The shock rocker took his stage surname from the late cult leader; his first name came from Marilyn Monroe. In his autobiography, "The Long Dark Road Out Of Hell", Marilyn wrote that his stage name embodies the "balance between good and evil."

In response to a KROQ news report about Manson's tweet, Stanley took to his own Twitter account to blast the 48-year-old rocker. He wrote: "[It's] pathetic when somebody [whose] career never really took off is desperate enough to try for publicity by connecting himself to the news of a murdering scumbag's death."

Back in September, Marilyn Manson described KISS as "four gay dudes in Halloween costumes" when he was shown a photo of the Stanley-fronted band by NME and asked to comment on the image.

One of the most notorious murderers of the 20th century, Charles Manson died on Sunday in a hospital in Kern County, California, north of Los Angeles. He was 83. Charles Manson had been rushed to a Bakersfield, California hospital from Corcoran State Prison earlier this month for an undisclosed medical issue.

In the summer of 1969, Charles Manson persuaded his followers to commit a string of murders in Los Angeles.

Although he was sentenced to death for the crime, Manson escaped execution when the state Supreme Court declared the death penalty unconstitutional at the time.

Pathetic when somebody who’s career never really took off is desperate enough to try for publicity by connecting himself to the news of a murdering scumbag’s death. @RollingStone@UltClassicRockhttps://t.co/SShmw5Wmse