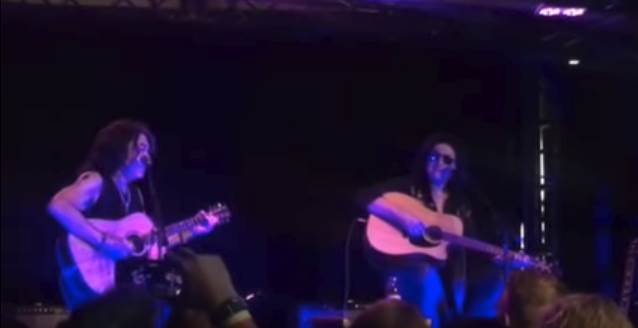 Paul Stanley joined Gene Simmons at his "Vault" event on Saturday, May 26 in Las Vegas, Nevada. The two KISS co-founders shared stories from their four-and-a-half-decade careers and performed acoustically in an intimate setting. Check out video footage below.

For the last five months, the KISS bassist/vocalist has has been traveling around the U.S., personally delivering copies of his limited-edition box set, "Gene Simmons - The Vault Experience: 1966-2016", to buyers. The set, including a ticket to one of the "Vault" gatherings, costs $2,000, with the most expensive version going for $50,000.

In addition to Stanley, Simmons has been joined by several of his current and former bandmates at various "The Vault" events so far, including Vinnie Vincent, Ace Frehley, Bruce Kulick, Eric Singer and Tommy Thayer.

Earlier in the year, KISS fans speculated that the band would soon embark on a farewell tour following the news that the legendary rock act was attempting to trademark the phrase "The End Of The Road." An application from KISS was filed on February 8 to the United States Patent and Trademark Office, which — should it be accepted — means that the band could use it in connection with "live performances by a musical band." As it stands now, no official farewell tour has been announced.