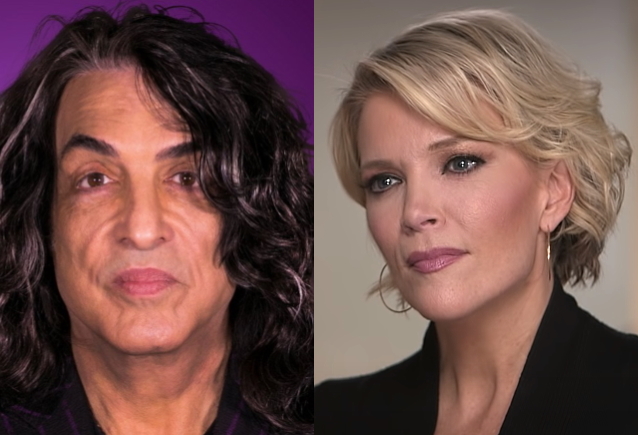 Paul Stanley has spoken out in support of Naomi Osaka after the tennis star was criticized by Megyn Kelly following the release of her Sports Illustrated Swimsuit magazine cover.

The KISS frontman defended the 23-year-old athlete on social media earlier today, writing that he thought what Kelly did was "mocking" and "ridiculing" Osaka.

Kelly — a former anchor for NBC News and Fox News — criticized Osaka for appearing on the covers of Vogue Japan, Time and Sports Illustrated Swimsuit magazines after Osaka announced that she was going to be taking a break for her mental health.

Earlier today, Stanley took to his Twitter to share a Chicago Sun-Times opinion piece about Kelly's attack on Osaka, and he included the following message: "Anyone brave & strong enough to seek help for their struggles whether physical or psychological should be commended, supported and applauded. It's vile that @megynkelly clearly finds joy mocking & ridiculing rather than extending an open hand. Shame on you".

In tweets on Monday, Kelly and conservative commentator Clay Travis implied that Osaka was not being honest about her struggles after she appeared in several magazines earlier this month.

"Since saying she's too introverted to talk to the media after tennis matches, Naomi Osaka has launched a reality show, a Barbie, and now is on the cover of the SI swimsuit issue," Travis tweeted.

Kelly joined in, adding: "Let's not forget the cover of (& interview in) Vogue Japan and Time Mag!"

In response, Osaka said in a now-deleted tweet: "Seeing as you're a journalist I would've assumed you would take the time to research what the lead times are for magazines, if you did that you would've found out I shot all of my covers last year."

This past May, Osaka made headlines when she announced that she would not speak to press during the French Open, revealing she had "suffered long bouts of depression" since winning her first Grand Slam title in 2018. The French Open responded by fining her $15,000. Organizers also said that repeated violations could lead to tougher sanctions including default from the tournament. Press conferences are a requirement for all players. She later left the tournament and withdrew from Wimbledon.

Anyone brave & strong enough to seek help for their struggles whether physical or psychological should be commended, supported and applauded. It’s vile that @megynkelly clearly finds joy mocking & ridiculing rather than extending an open hand. Shame on you https://t.co/VBNPFDFE1H