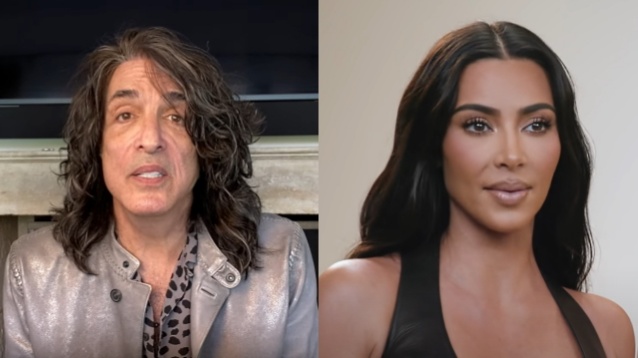 KISS frontman Paul Stanley has called out Kim Kardashian over her recent advice encouraging women in business to work harder.

A new clip from a recent profile of Kardashian and her famous family for Variety has gone viral after the 41-year-old told women to "get your fucking ass up and work" to be successful in business.

"I have the best advice for women in business," Kardashian said. "Get your fucking ass up and work. It seems like nobody wants to work these days.

"You have to surround yourself with people that want to work," Kardashian continued. "Have a good work environment where everyone loves what they do because you have one life. No toxic work environments and show up and do the work."

Earlier today, Stanley shared an article about Kardashian's comments and criticized the media personality, socialite and businesswoman for implying that all women, including those with fewer economic advantages than her, just weren't working hard enough.

"The irony here would be funny if it wasn't such an insult to millions of women who struggle to achieve and put food on the table while battling a system of inequality and inequities," Paul wrote. "Kim, You were born rich. Embrace it with grace by not being blind."

In the Variety interview, Kim took offense over the public assumption that she's "famous for being famous" and attributed her family's success to its work ethic.

"We focus on the positive," she said. "We work our asses off. If that's what you think, then sorry. We just don't have the energy for that. We don't have to sing or dance or act; we get to live our lives — and hey, we made it. I don't know what to tell you."

Stanley previously touched upon the subject of hard work in a December 2020 interview with "Lipps Service With Scott Lipps". Speaking about the fact that his parents were not necessarily supportive when he told them he wanted to get into music early on, he said: "I was determined, and as other people were pursuing careers in medicine and things like that, I spent seven days a week, 24 hours a day, figuring how am I going to do this. Because it doesn't happen on its own.

"If you have a goal and if you've really done an assessment of yourself and you truly believe you're capable of doing it, the only thing that's in your way is hard work," Paul continued. "Obstacles? Sure, there's always obstacles. There's people who tell you what's impossible, and those people are always the ones who failed.

"So, if I can be a light for anybody at this point in my life, I tell people, 'You can do it if it's really within your power to do it.' I wasn't an idiot. I never pursued becoming a mathematician because I'm an idiot at math. But if you truly know innately that you can do something, then you can."

The irony here would be funny if it wasn’t such an insult to millions of women who struggle to achieve and put food on the table while battling a system of inequality and inequities. Kim, You were born rich. Embrace it with grace by not being blind. https://t.co/08OJSYLLOR