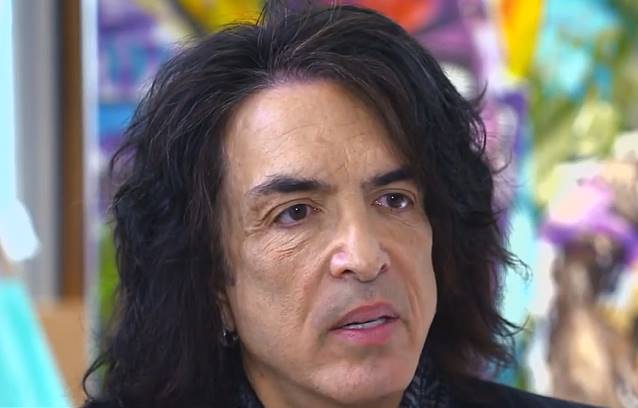 KISS frontman Paul Stanley has slammed Rock And Roll Hall Of Fame co-founder and Rolling Stone editor Jann Wenner as a "spineless weasel," claiming that the guitarist/vocalist and the rest of the band were treated like "uninvited guests" during Thursday night's (April 10) induction ceremony.

"Our treatment at the [Rock And Roll Hall Of Fame] confirmed my worst suspicions," Stanleyfumed via Twitter. "Wenner and the rest are spineless weasels." He went on to say that the people behind the Rock Hall gave the members of KISS "no passes" or "schedule" for the evening, but didn't elaborate on what exactly he was referring to. He concluded: "We were great and [Wenner] remains a small man."

Stanley's bandmate, KISS bassist/vocalist Gene Simmons, also took a couple of shots at Rolling Stone on Twitter, mocking the magazine's original critical review of LED ZEPPELIN's first album, writing "Rolling Stone. Idiots then. Idiots now." He then posted a link to a video from the early 1970s band CHRISTOPHER MILK, which featured John Mendelsohn, the writer who penned the negative reviews that appeared in Rolling Stone of each of the first two LED ZEPPELIN LPs.

Stanley ended his Hall Of Fame speech on Thursday by calling the evening "vindication" for the fans. He also took a dig at the Hall Of Fame by saying, "The people, I believe, are speaking to the Rock And Roll Hall Of Fame, and what they're saying is, 'We want more.' They deserve more. They want to be a part of the induction. They want to be a part of the nomination. They don't want to be spoon-fed by a handful of people. Choices. The people pay for tickets. The people buy albums. The people who nominate do not. Let's not forget that these are the people that make it all possible. We just benefit from it."

KISS did not perform at the ceremony — the Hall Of Fame wanted the original quartet only to play, while Simmons and Stanley insisted on the current lineup performing as well. In the end nobody won that battle.

The 29th annual Rock And Roll Hall Of Fame induction ceremony was taped and will air on May 31 on HBO.