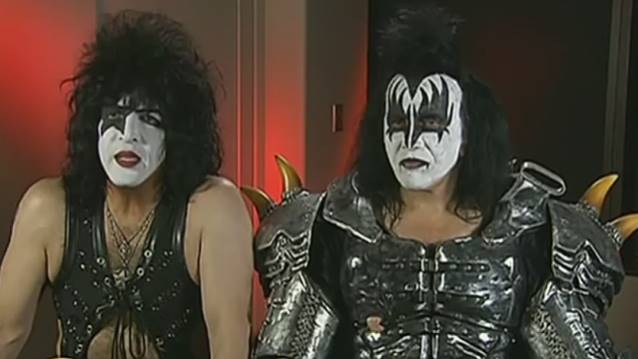 PAUL STANLEY: Having Original KISS Lineup Perform At ROCK HALL Induction In Makeup Was A 'Nonstarter'

KISS members Paul Stanley and Gene Simmons have spoken out about their controversial announcement that no members of KISS will be playing at the April 10 Rock And Roll Hall Of Fame induction ceremony in Brooklyn. Their statement came on the heels of Ace Frehley explaining to fans that neither he nor Peter Criss are invited to play with Simmons and Stanley.

Speaking to the Los Angeles Times, Stanley called the option of putting the original quartet in makeup at the Rock Hall induction "a nonstarter," while Simmons added: "Imagine getting onstage and playing with a lineup that does not exist."

Criss and Frehley responded to the Los Angeles Times' request for a comment via email, with Criss writing: "We should [have] been able to work it out as grown men; it's a shame we couldn't." Frehley said: "My guitar playing, singing, writing, performing and producing skills are as good or better than the past.

"For years, Gene and Paul have been trying to minimize my contributions to the band, even though I designed the famous KISS logo … and designed the trademarked makeup for the Spaceman character."

Gene Simmons and Paul Stanley have chosen to have the rest of the current KISS lineup — guitarist Tommy Thayer and longtime drummer Eric Singer — dress up as Criss' and Frehley's respective "Spaceman" and "Catman" personas (designs owned by Simmons and Stanley).

"The naysayers, and some of them are loud, talk about Tommy or Eric being impostors," Stanley told the Los Angeles Times. "I think an impostor is a guy up there doing it for a paycheck. We've never been happier."

The Pulse Of Radio asked Simmons what it feels like to turn around and see the spitting image of his former bandmates — yet it's someone else. "Y'know, we still have a tug of the heart," he said. "It's like your drunken dysfunctional father who was a bum and you finally had to get rid of him — but you still remember the beginning when he was a good dad. Ace and Peter are beloved, as they should be, for the beginning. For helping launch the band — if you don't mind me saying so — that changed the face of rock 'n roll, literally and figuratively speaking. But equally as important part of the beginning of KISS, it's also important to know that with them in the band today, KISS wouldn't be around."

In a 2012 interview with Revolver magazine, Stanley and Gene Simmons were asked if they are bothered when people complain about Frehley and Criss not being in the KISS anymore. "Almost nobody does," Simmons replied.

"When you have 3-year-old and 5-year-old fans showing up to our concerts — or even 30-year-old fans — they don't know about Ace and Peter. I mean, next year is going to be our 40th year. We've been touring longer than most of the people who come see us live have been alive.

"Who's Ace and Peter?

"By the way, bless 'em both — what I just said doesn't mean that Ace and Peter weren't every bit as important as Paul and myself in the beginning of the band, but not everybody has the same DNA. Some people shouldn't be in a marathon race. They're just not designed for it. Some people are good for short runs."

"Eric's been in and out of the band for 20-some-odd years. And Tommy, too," added Stanley.

"The only people who would complain, I think, are people who don't really follow the band at this point.

"The myth that sometimes surrounds the original lineup is purely myth. Some of it was of our own doing. The whole projecting the idea that it was four guys giving equally. Quite honestly, it was kind of our take on THE BEATLES: four guys that spend all their time together and run down the street jumping up in the air. But it's not a reality. And maybe part of the problem was that some of the guys in the band really bought into believing it.

"The band always had two people who were leading it and the idea that anybody is entitled to having songs on an album is crazy."

On the topic of why they think they felt like they had to project those myths in the early days, Stanley said, "Well, l think there was a certain amount of truth to it. Just in the sense of you have a band and there's a certain camaraderie, but there's also a sensitivity factor to people feeling minimized or left out. So to avoid that, we sometimes gave people more than their due.

"In those days, Gene and I shared our songwriting l with those guys because we didn't ever want it to be an issue that anybody was making more money than the other and therefore wanting songs on the album. Well. it obviously didn't work. [laughs] The only thing l did was give money away. [laughs] But all that being said, I've said it before. I'll say it again — we couldn't be here today without what Ace and Peter did in the beginning, and we couldn't be here today if they were still in the band."