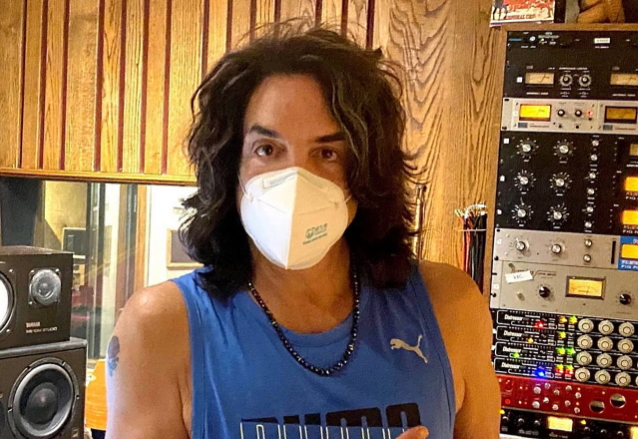 PAUL STANLEY: 'It's Unfortunate That Some People Are Vehemently Against' Wearing Masks

Paul Stanley has defended his right to speak out on political issues, saying that he voices his opinions as an American citizen.

The KISS frontman discussed his decision to publicly express his political views in a new interview with Lyndsey Parker of Yahoo Music.

Speaking about the fact that he has used his Twitter account in recent months to blast people who are defiantly skeptical of mask wearing, saying they are posing a risk to themselves and to all those around them, Paul said: "It's unfortunate that some people are vehemently against [wearing masks], mainly because of it being politicized. There's so much strange backlash. And when somebody says, 'Well, the experts, first they said, 'Don't wear a mask,' and then they said, Wear a mask'… Right. Because this is a work in progress, and we're learning about this virus. So, is it gonna change, is the information gonna change? Of course it's gonna change. But, unequivocally, what's been shown, as far as I can see, is that masks are a great deterrent. And depending upon what masks you wear, you're either protecting the people around you or you're protecting yourself. You go into N95 masks and KN95 masks, and you're protecting yourself in addition. So, look, I wish everybody well, and I would like to think that I'm doing my part to spread the information I have. And if some people are angered by it, that's something they should think about, 'cause it's nothing to get angry about. I mean, if you disagree, so be it."

As for those detractors who think musicians like Stanley and his KISS bandmate Gene Simmons should just "shut up and sing" and not share such opinions, Paul said: "It's interesting. Times have changed, because there was a time where I thought, well, entertainers should just entertain. But the fact is that, quite frankly, I see myself as a citizen. And I think that my voice is at least as important as anyone else's. And to not be able to voice my opinion actually seems un-American. It's not surprising to me, at this point, that the people who say 'shut up' are the people who don't agree. If I was on your side, you'd go, 'Yeah, keep talking.' It's not a surprise that the people who would like people like me to not voice an opinion are the people who are on the other side of the fence. And that's too bad, that's sad, because, again, I don't wanna politicize anything. I'm trying to help. I'm trying to make people aware that perhaps we can end this pandemic a little bit sooner and with some less fatality. So it's not a matter of who you vote for, or conspiracies, or anything like that. I just wanna help."

Stanley is currently promoting the debut album from his SOUL STATION project, "Now And Then", which will be released on March 19 via Universal Music Enterprises.