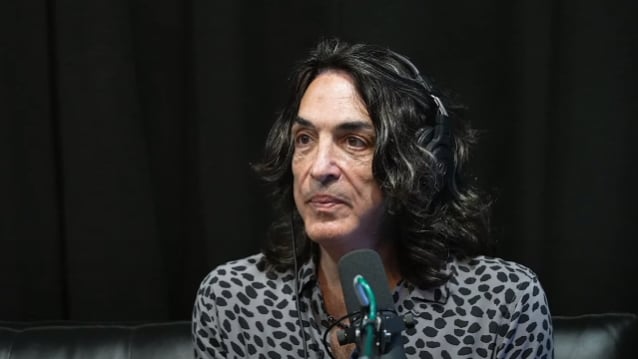 PAUL STANLEY On Why He Isn't Interested In Writing New KISS Music: 'It's Setting Myself Up For Disappointment'

KISS frontman Paul Stanley is the featured guest on "Howie Mandel Does Stuff", the podcast co-hosted by the comedian and his daughter Jackelyn Shultz. You can now watch video of Paul's appearance below.

Asked if KISS is actively working on new music, Paul said (as transcribed by BLABBERMOUTH.NET): "No. Because at this point, I came to the conclusion that it can never compete with the past. Not because it's not as good, but it hasn't the connection to important times in your life. It doesn't have that patina to it of, 'Gee, I remember I heard this song when I was 18,' or, 'I heard this song when I was on my first date or whatever.' You can't compete with that. It's more than a song; it's a snapshot of your life at a certain point.

"We did two albums in the last, I think probably 10 years, and there are songs on those that are every bit as good as anything I've ever written, but they're new.

"Somebody says, 'Why don't you do a new album?' You do a new album and do a song — we have one song, 'Modern Day Delilah', which is as good as 'Love Gun' or any of these songs, but it hasn't aged; it's not like wine that has a chance to have grown in importance," Paul explained. "Not just because of what it is, but because what it's surrounded by."

Elaborating on why he is not interested in working on new KISS music, Paul said: "I think it's setting myself up for disappointment. Not crushing disappointment, but when you put your heart and soul into doing something and it kind of gets a polite nod, there's other things I'd rather do."

KISS hasn't issued a full-length disc of new music since 2012's "Monster", which sold 56,000 copies in the United States in its first week of release to land at position No. 3 on The Billboard 200 chart. The band's previous LP, "Sonic Boom", opened with 108,000 units back in October 2009 to enter the chart at No. 2. It was KISS's highest-charting LP ever.

Stanley, who in 2021 released the debut album from his SOUL STATION project, previously discussed the possibility of KISS producing new music during a question-and-answer session on last year's Kiss Kruise. He said: "Why would we need a new KISS album? Any big classic band with a history, you go, 'Oh, put out a new album.' You know, if THE [ROLLING] STONES put out a new album, you go, 'Oh, that's great. Play 'Brown Sugar'.' … Yeah, maybe not now," apparently referencing the fact that THE ROLLING STONES recently retired one of their most popular songs due to lyrics that depict the horrors of slavery. "But the same is true for us. You can have great songs on the more recent albums, but people then go, 'Great. Play 'Love Gun'.'

"The reality is you really love the old songs, and nobody is going to embrace new material, no matter how good it is, like you do the past, because those songs are part — those are like snapshots from your past, and you're connected to them in a way new material never could be," he explained. We're happy going out and playing. That's where we live; that's our turf, is the stage."

Paul's comments echoed those he made in March 2021 when he told USA Today in an interview that he didn't really see a "reason" for KISS to make any new music. "For the most part, when classic bands put out new albums, they're looked at and listened to and thrown away because they don't have the gravitas, they don't have the age that comes with something being a time capsule or being attached to a certain period of your life," he said. "I'm not alone in that. When you see any classic bands on TV or if there's a concert video, turn off the sound and I'll tell you every time they're playing a new song because the audience sits down.

In the past, Paul had expressed uncertainty about the idea of making another KISS album in a number of other interviews, telling the "Loudwire Podcast": "If we're going to do an album, it would be because we want to do an album, not because of sales. I think we're living in a time, obviously, now where albums don't sell what they once did, so you either do it because it's a creative outlet and because it satisfies something in you, or not. If you're doing it purely for sales, then you're probably doing it for the wrong reason."

KISS bassist/vocalist Gene Simmons has agreed with his bandmate, saying in an interview that he was "not incentivized" to release another KISS disc unless there are some major changes in the way music is consumed. He said: "The idea that you work your ass off and then someone with freckles on their face decides they want to download your music and file share — that's not what I work for. How'd you like to be a plumber, come over somebody's house and work all day to fix their plumbing and then when it's time to get paid, they say, 'No, I just wanted to say thank you.' No."

"End Of The Road" was originally scheduled to conclude on July 17, 2021 in New York City but is now expected to last into early 2023.