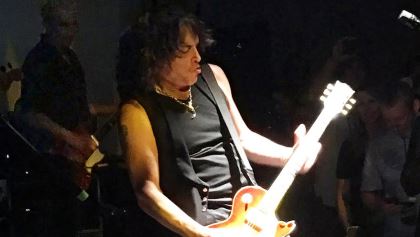 According to The Pulse Of Radio, FOO FIGHTERS headlined and hosted a private concert on Saturday night (October 15) in Los Angeles that featured guest appearances from Sammy Hagar, Paul Stanley of KISS, JANE'S ADDICTION singer Perry Farrell, Steve Jones of the SEX PISTOLS, THE POLICE drummer Stewart Copeland and others. The concert took place in front of just a couple of hundred donors who gave money to the FOO FIGHTERS' annual fundraising drive for improvements at local schools.

Among the highlights of the show were Hagar teaming with FOO FIGHTERS leader Dave Grohl for a duet on VAN HALEN's "Finish What You Started" before they were joined by Jason Bonham for a take on LED ZEPPELIN's "Rock 'N' Roll".

Stanley tackled ZEPPELIN's "Whole Lotta Love" and THE ROLLING STONES' "It's Only Rock ‘n' Roll (But I Like It)" in addition to several KISS favorites.

Check out photos of the event at RedRocker.com.

Grohl told The Pulse Of Radio a while back how he got to know Stanley outside of the music business. "I see Paul Stanley every morning at drop-off 'cause our kids go to school with each other," he said. "Paul is not only a great dude, but a great dad. He's there at 7:30 every morning with his kid and it's the greatest — I mean, it's inspiring. Like, of course, I love KISS and I'm inspired by him as a musician, but when I see him being, like, a dude — being a dad — it's like, that's the coolest thing in the world to me."

The FOO FIGHTERS played a selection of their own hits, including "Learn To Fly", "My Hero", "Times Like These", "All My Life", "Everlong" and "Best Of You".

FOO FIGHTERS have been on hiatus since the end of their European trek last November, but various anecdotal reports suggest that Grohl has been working on new music, potentially for the group's ninth studio effort.

Although Grohl has hinted that HBO was interested in a second season of the documentary series "Sonic Highways", which followed the FOO FIGHTERS around the country as they recorded the 2014 album of the same name, there has been no official announcement that the series is returning.

Shakin' the walls & heavens with @foofighters & my bro Dave last night at a killer secret gig. Got my choice '59, 9-1255 and we go BOOM! pic.twitter.com/eZ4RigArjR