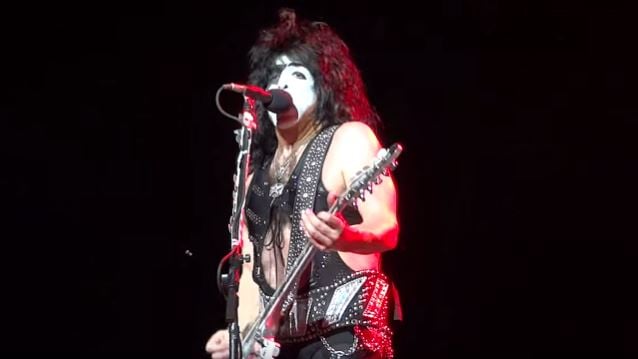 KISS frontman Paul Stanley was interviewed this past week on Brisbane, Australia's 4KQ commercial radio station. You can now listen to the chat using the SoundCloud widget below. A few excerpts follow (transcribed by BLABBERMOUTH.NET).

Stanley: "We managed to keep a certain amount of our original fans, but, ultimately, we've become more of a tribe. I think for many bands, they're very age specific — you don't want your younger brother there, and you don't want your older brother. With KISS, it's like we're all members of this big tribe and this secret society, so if your dad comes with you, it's awesome, if your little brother, if your neighbor… It's all about sharing something very special that everybody holds dear."

On whether the band KISS owns the rights to the makeup made famous by all the group's original members:

Stanley: "Very much so. Years ago, the original guys [guitarist Ace Frehley and drummer Peter Criss], basically, sold it off for, you know, not a whole lot, because they didn't think it was worth anything. Quite honestly, I've always thought that our image and what we represent is priceless. So… That it didn't matter to some other people, it truly matters to me. So, that being said, [current KISS drummer] Eric Singer I've known 26 years and I think he's been in the band for decades. And Tommy [Thayer, current KISS guitarist] has been around the band for decades and has been in the band probably 12 or 13 years. I have to say KISS is somewhat like a football team, or an army. If somebody falls by the wayside, somebody else picks up the flag and runs. If somebody is out on the football team, somebody else comes along. I don't think that when you go to see your favorite football team, you're yelling out that you wanna see somebody who was in the team 20 years ago. Time moves on, but the team lives on."

On most KISS fans' belief that Paul Stanley and Gene Simmons are irreplaceable:

Stanley: "Well, I can see KISS without Gene. [Laughs] As much as I'm a big fan of what I do and think I do it really well, I didn't invent the wheel. Somebody is out there who can come in and take my place, and at some point, I don't see a reason for the band to fold anymore than I can see a reason for a team to fold."

On KISS being the most merchandised band in history:

Stanley: "Interstingly, when we first started out, we were kind of thought to be heretics, so to speak, because instead of just being a rock band, we wanted to be more and we wanted to give our fans more, and lo and behold, other bands saw not only that it was proper to give your fans the things they want, but all of a sudden, other bands saw the potential to make money out of it, and they followed suit."