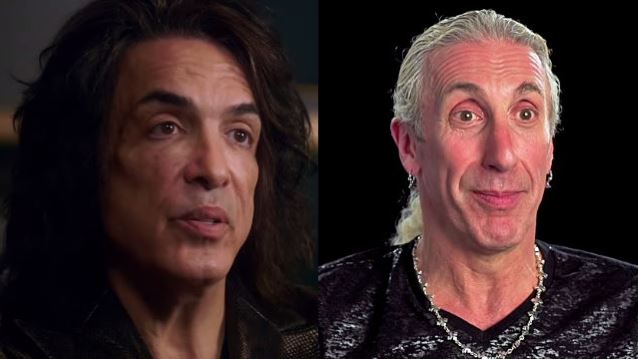 KISS leader Paul Stanley has called Dee Snider a "wannabe" after the TWISTED SISTER frontman referred to the current KISS lineup as an "insult."

During a recent appearance on Eddie Trunk's show, Snider criticized Stanley and KISS bassist Gene Simmons for having current KISS members Tommy Thayer and Eric Singer dress up as Peter Criss's and Ace Frehley's respective "Spaceman" and "Catman" personas. Dee told Trunk: "I don't see how people could accept this. Tommy Thayer? I'm sorry. It's insulting. Not only did he play in a tribute band of KISS, he's imitating Ace in his entire act!" Snider went on to bash Thayer for allegedly copying Ace's stage moves. He said: "Oh my God — that's disgraceful. When KISS replaced Ace and Peter, and they brought in guys [Eric Carr and Vinnie Vincent] who had their own makeup and their own thing, that was acceptable. That was awesome. They were their own characters."

Stanley previously defended KISS's decision to have Thayer and Singer use the "Spaceman" and "Catman" makeup, explaining that it was a mistake to try to introduce new characters in the band (in a short-lived '80s incarnation of KISS, guitarist Vinnie Vincent was the Ankh Warrior, and the late drummer Eric Carr was the Fox). He said: "I think where we went astray is when we first replaced Peter and we decided we needed a new character. And the problem with that kind of stuff is that it started to become — interestingly, I think — disingenuous. It took an air of 'fake' in the sense that it became a menagerie. I mean, we had a Fox and an Egyptian Warrior. Next we would have the Turtle Boy and The Frog Man. So I think once we brought Ace and Peter back for the reunion tour, which I hoped would go on forever… In other words, I hoped that everybody would get back together, everybody would see the error in their ways and we would move forward and stay together forever. But when that wasn't to be, I thought, you know, we really built these four images. And, arguably, you can go anywhere in the world and people know who KISS is, regardless of whether they know who those people are. So to give up that because we found that those guys were no longer either capable or wanted to give it a hundred percent, well, then who loses out? The fans. So, no. Those images are the images that will continue when I'm not here either."

A few months ago, Stanley told Rolling Stone magazine that part of the reason the new characters in KISS didn't work is simply that "people didn't buy it. It lost its believability." He added: "We saw a decline that started gradually, but quickly we fell off the edge of the cliff. To go from doing multiple nights in an arena to, next tour, not being able to sell out a theater, is stark."

During an interview for VH1 Classic "That Metal Show" co-host Eddie Trunk's podcast, "Eddie Trunk Podcast", Frehley was asked what his "evaluation" is of Tommy "dressed as [Ace]" and "doing [Ace's] thing." He responded: "[Tommy is] not Ace Frehley by any stretch of the imagination, number one. Number two, what bothers me the most is that I know the new fans that KISS are getting don't know it. A lot of people that see Tommy up there think he's the original guy that created the makeup, that wrote great songs and wrote all those solos that he's performing, but he's not. He's just a guy up there copying me and trying to move like me and trying to sing like me and trying to play like me. And that's what bothers me the most. I mean, the real hardcore fans know. But the new fans, a lot of them don't know."