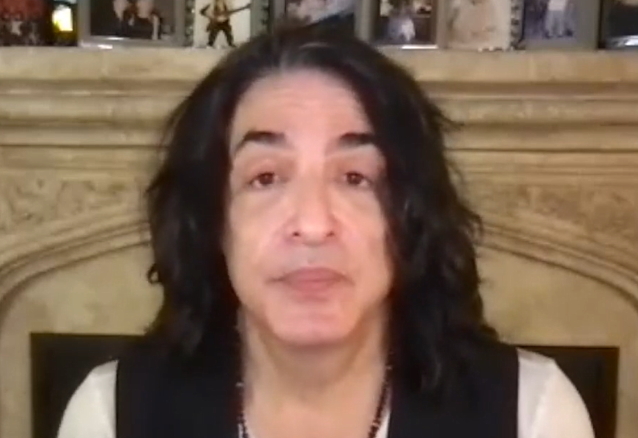 Paul Stanley says that he doesn't know if there is any truth to the rumor that Eddie Van Halen almost joined KISS nearly four decades ago.

Paul discussed Eddie's supposed interest in becoming a KISS member during a new appearance on "The Jeremy White Podcast". Asked if it's true that the legendary VAN HALEN guitarist once showed an interest in playing with the makeup-adorned rockers, Stanley said (see video below): "I have to say, I didn't ever hear that. I was on the phone with him around that time. He was calling me, and I think there was tension in his band. He was asking me, for example, why we did solo albums, why we had to do that. I think he felt that fracturing within his band. But as far as anything beyond that, wanting to join us or anything like that, I can't say no and I wouldn't say no. I don't know. I'll leave that to Gene [Simmons, KISS bassist/vocalist]."

Gene has claimed in several interviews that he once had to talk Eddie out of leaving VAN HALEN and teaming up with KISS. Asked in the April 2014 issue of Guitar World if it was true that Van Halen wanted to join KISS around the time of 1982's "Creatures Of The Night" album, Simmons said: "That is true. And he was very serious. He was so unhappy about how he and [David Lee] Roth were — or weren't — getting along. He couldn't stand him. And drugs were rampant. And so he took me to lunch, to a diner right across the street from the Record Plant. Vinnie Vincent, who was not yet in KISS, tagged along, too. Sneaky guy. And Eddie said, 'I want to join KISS. I don't want to fight anymore with Roth. I'm sick and tired of it.' But I told him, 'Eddie, there's not enough room. You need to be in a band where you can direct the music. You're not going to be happy in KISS.' I talked him out of it. It didn't fit."

During the 2018 "Kiss Kruise", Stanley was asked by a fan if there is any truth to the rumor that Eddie nearly ended up in KISS. Paul responded: "No. Eddie Van Halen did not almost join KISS. Eddie [came down to] the studio. I think there was some strife within the band [VAN HALEN] at that point, for him, and Eddie came down just to see what was going on. And I remember he was really blown away by the solo in [the song] 'Creatures [Of The Night]'. He said, 'Get that guy.' That guy who played the solo in 'Creatures' was a guy named Steve Farris, who was in a band called MISTER MISTER, who had a bunch of hits. But the guitar player was great. And at that point, Eddie was getting into keyboards. And I remember he brought some tapes of some of the songs he was working on. And it was, like, this guy is this unbelievable guitar player. [I thought], 'Eddie, what are you doing on keyboards?' But that was the start of 'Jump' and all that other stuff that came afterwards. But Eddie was never going to join KISS and was never almost in KISS."

In a 1995 interview with The Times Leader, Eddie was asked if it was true that he met with Gene and Paul in Los Angeles 13 years earlier to discuss the possibility of him joining KISS. He responded: "Not that I know of… Unless I was so fucked up [that] I don't remember. They might have asked me… They might have just asked me in passing, and I just kind of laughed it off, probably. If it happened, I'm sure I would have remembered. Maybe they did ask me and I just thought they were joking."