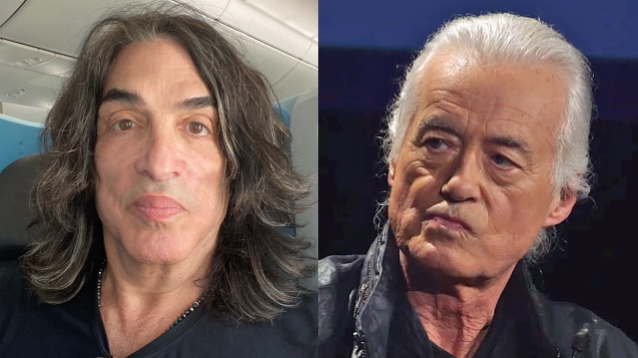 PAUL STANLEY Says JIMMY PAGE Is More Than Just A Guitar Player: 'He Paints With Sound'

During a question-and-answer session aboard this year's "Kiss Kruise", KISS frontman Paul Stanley was asked by L.A. GUNS guitarist Tracii Guns to name his musical role model. He responded (as transcribed by BLABBERMOUTH.NET): "The guy who I respect the most and had the most impact on me is Jimmy Page… Jimmy's Beethoven. Jimmy is so far beyond… When people say, 'Oh, all respect to a lot of other hotshot guitar players,' they're guitar players. Jimmy Page is a brilliant cinematographer; he's a brilliant arranger. He paints with sound.

"There's lots of guys… They say, 'Well, who's better: [Eric] Clapton or…?' Jimmy Page is in a class totally by himself," Paul continued. "And there's loads of great guitar players, but he's so far beyond that. Plus, it's amazing, 'cause I was a 17-year-old kid seeing them in 1969 and it was life-changing — it changed my life. I couldn't believe how great they were; I couldn't believe that the bar could be that high. And to be at this point in my life where I go out to dinner with Jimmy, or Jimmy sends me texts, or says to me, about KISS he goes, 'You guys are a serious, kick-ass rock and roll band.' Well, it doesn't get better than that."

Stanley went on to say that Page is a prime example of how you don't need to be the most incredible technical guitarist to be able to move people with your playing.

In a 2019 interview with Dean Delray's "Let There Be Talk" podcast, Stanley recalled the first time he witnessed a LED ZEPPELIN concert when he was just 17 years old and living in New York.

"I saw ZEPPELIN in, I think it was August of '69 — between the first and second [records]," Stanley said. "And they were actually playing 'What Is And What Should Never Be', a couple of those tracks, and Jimmy had his bow and they were panning his guitar left and right so he could point it.

"I was just absolutely blown away," he continued. "To this day, I've never seen anything that was that perfect. Not just in terms of the synchronicity and the fact that everybody was so much on the same playing field — it was the sexual energy that was coming off the stage, the flamboyance, the cocksure attitude. They backed it up. I think they knew how great they were. And I was just…

"First of all, the band was spectacular and played — I won't use any profanity — but they played tighter than a something… So, they were amazing. And Robert Plant was singing like something from another planet. He was hitting notes effortlessly, and there was such bravado in everything they were doing, it just blew me away."

Stanley also talked about his friendship with the LED ZEPPELIN guitarist and what it has meant to him to connect with his idol on a personal level.

"It's amazing to have been a young kid seeing ZEPPELIN and then play London and have Jimmy watching us… Jimmy saw [KISS], I think it was the tour before last," he said. "And subsequent to that, we've had dinner and gone out for tea and lunch.

"There's an old adage that you should be weary of meeting your heroes and the people you look up to, because, quite frankly, a lot of them are assholes," Stanley added. "Jimmy is the complete opposite. He lives and breathes music, and he's a terrific, terrific guy, and I would argue the most important and influential guitar player, not only in terms of playing, but in terms of vision. What he created was symphonic. It's not as simple as a guitar, bass and drums and a singer. What he did on those records was multilayered and a tapestry of sorts. He's painted with an amazing brush and amazing palette of colors. So he's right up there at the top for me."

More than a decade ago, Stanley told the Las Vegas Sun that he first met Page back in 1976 while KISS was recording its "Destroyer" album and LED ZEPPELIN was putting together the "The Song Remains The Same" soundtrack, and the two happened to be across each other in the lobby of the recording studio.

"We were in the lobby, and Jimmy came up and he knew who I was, and who the band was," Stanley remembered. "It was stunning. Not five years earlier, I was in the audience, watching LED ZEPPELIN with my mouth open, just not believing it."

Hours of great talk, laughs and dinner with my friend Jimmy in London today. I love the times we spend together. He was blown away by photos of our full stage and thrilled for Download. I had to say “Jimmy, you’re at the foundation of everything we do.” @JimmyPage@DownloadFestpic.twitter.com/7WHpjuKrAf

Happy Birthday Jimmy Page! You have changed music forever and opened the eyes and ears of so many. Your music will live on bringing awe and joy to millions. Spending time with you is always a joy and an inspiration for me. @JimmyPage@ledzeppelinpic.twitter.com/tNcAuW3r5f