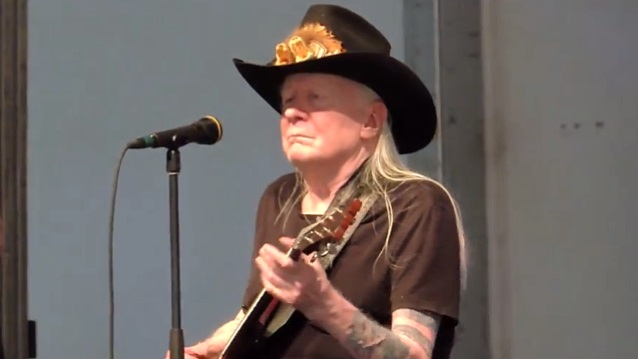 Paul Stanley (KISS),Slash (GUNS N' ROSES),Zakk Wylde (BLACK LABEL SOCIETY, OZZY OSBOURNE),Nikki Sixx (MÖTLEY CRÜE) and Michael Anthony (VAN HALEN, CHICKENFOOT) are among the musicians who reacted on Twitter and Facebook to the passing of blues legend Johnny Winter, who died Wednesday (July 16) at his hotel room in Zurich, Switzerland at the age of 70.

According to the Chicago Tribune, there was no indication of third-party involvement, and early signs pointed to a medically related incident.

A prosecutor has ordered an autopsy because the cause of death is unclear.

Speaking to JournalStar.com last month, Johnny Winter said: "When I was about 12, I knew I wanted to be a musician. The blues had so much emotion and so much feeling; if you don't have that, you're not going to be good at it."

Asked if there was anything left for him to accomplish, Winter said: "I've never won a Grammy on my own — I'd like to do that. The ones I've got have been with Muddy. I've been nominated a lot of times but never won."

Regarding what he would like his legacy to be, Winter said: "I just hope I'm remembered as a good blues musician."

Winter remained active up until his death and was scheduled to release a new studio album, "Step Back", on September 2 via Megaforce Records. The follow-up to 2011's "Roots" features a host of special guests, including Eric Clapton, Ben Harper, Billy Gibbons, Joe Perry, Dr. John, Leslie West, Brian Setzer and Joe Bonnamassa.

Matt Sorum (GUNS N' ROSES): "I've just become close with Edgar and I'm so sad for him and his family. They had plans to tour."

Billy Gibbons (ZZ TOP): "When I first saw Johnny perform, I was maybe 12 or 13, and he was known as 'Johnny Cool Daddy Winter' and we've always thought of him as exactly that: 'One Cool Daddy.'

"Johnny became a dear and passionate friend as well as the accomplished bluesman we have come to admire.

"It's now a moment for celebration of his brilliance frozen for all time.

"We've lost another of the gifted guitar greats and a truly soulful spirit."

Check my Instagram @SLASH for a great shot of the late great Johnny Winter. RIP

Rest in peace #JohnnyWinter. We all knew him. TJ got his first Firebird from Johnny in NYC in '73! Cool guy, Incredible guitar player!

R.I.P Johnny Winter - We will miss you

So bummed to hear about Johnny Winters passing. I spend many many years soaking up his music late into the night. #Original#TheBlues

We are really sad to hear that Johnny Winter has passed away. The world has lost a true legend and good man. Rest... http://t.co/aUCMqbtD3r

RIP JOHNNY WINTER. We have lost one of the absolute greats. What a player. Thank you for all the fire. pic.twitter.com/wzBlyKuW3g

Firebirds, slide & national steel...Just some of Johnny Winters influence on me. He changed my playing… http://t.co/IY9XX9tTzR