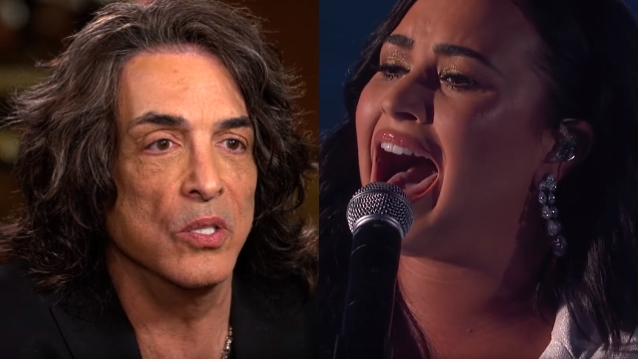 KISS frontman Paul Stanley says that he was "blown away" by Demi Lovato's performance at this past weekend's Grammy Awards.

The former Disney actor gave her first performance in a year and a half at this year's ceremony, singing a song that she wrote just a few days before being hospitalized in July 2018. At the time, Lovato was rushed from her home in the Hollywood Hills to a Los Angeles-area hospital after paramedics found her unconscious. She was reportedly treated with Narcan, an emergency treatment for narcotics overdoses.

Earlier today, Stanley shared a The Atlantic article about Demi's comeback appearance and he included the following message: "Rewatching the Grammys and once again blown away that the most powerful spectacle of the evening was a woman standing at a piano baring her soul and struggles while reaching amazing heights with her lyrics and melody. Demi Lovato... WOW!"

Upon starting the Grammy performance of the song, titled "Anyone", Lovato was too choked up to continue and had to restart. But she carried on and was greeted by a standing ovation at the end.

KISS's "End Of The Road" farewell tour kicked off in January 2019 in Vancouver and will resume on February 1 in Manchester, New Hampshire. The last concert of the trek will take place on July 17, 2021 in New York City.

Rewatching the Grammys and once again blown away that the most powerful spectacle of the evening was a woman standing at a piano baring her soul and struggles while reaching amazing heights with her lyrics and melody. Demi Lovato... WOW! @RecordingAcad https://t.co/hiFWuKpLKP