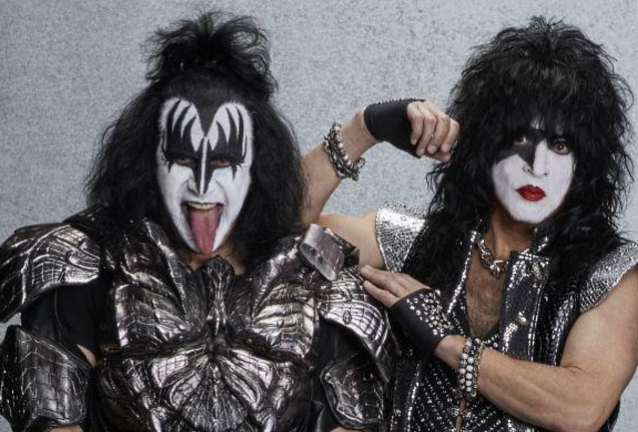 Paul Stanley has once again said that he believes KISS can carry on without any original members.

Almost two years ago, the legendary rockers launched their second farewell tour, dubbed "End Of The Road", which is now scheduled to end sometime in 2022. Joining founding members Stanley and Gene Simmons in the band's current lineup are Tommy Thayer on guitar and Eric Singer on drums. Thayer and Singer are replacements for original members Ace Frehley and Peter Criss, respectively.

Asked by Scott Lipps whether he thinks KISS could one day exist without him and Simmons, Stanley said (see video below): "Unlike other bands, that rubs some people the wrong way, but KISS is so much more than a band. Look, you go see any act now — any band, any performer — and you're seeing a KISS show, you're seeing the KISS DNA, because everything that anybody does is, in some way, based on what we've done. And I've always believed that the band is bigger than the individuals. People would say, in the beginning, 'Oh, that's not true.' Well, they're half wrong now, because Eric's been in and out of the band for over 20 years, and Tommy's been in the band probably 18 now, and the band's never been better.

"So my feeling is… Is there someone who can take my place? I think I'm really damn good, but I also know that there's people out there who are as committed to what they do as I've been and should be able to do what I do without copying it," he continued. "So do I think it's possible? Yeah. I actually would consider it beyond flattering — I would consider it a real feather in the cap if KISS could continue as a viable live act, because it's ultimately about what we deliver and about our philosophy of giving fans a hundred percent, not only on stage but in terms of this reciprocity that we have with them."

Stanley added: "Could another band do it? I don't wanna point fingers, but at this point, who are THE EAGLES? It's [Don] Henley and a bunch of other guys who are really super talented. Does it sound like THE EAGLES? Yeah. So, people wanna hear that music. When Steve Perry left JOURNEY, you had [people saying], 'Well, that's the end of JOURNEY,' but people wanna hear those songs, and they wanna hear them done the way they remember them, so Arnel [Pineda] does a great job. So this just takes it to another level. But we're not setting the precedent; we're just following one."

Four years ago, Stanley spoke about how he would go about finding someone to replace him in KISS. He said: "Honestly, I think all the KISS tribute bands are great, but none of them have a good 'Paul.' So I'd like to see somebody who incorporates what I've done with a lot of the things that inspired me. And it's not a matter of a puppet being me; it's somebody who comes in and contributes and adds something new to it while still following the template that's been set."