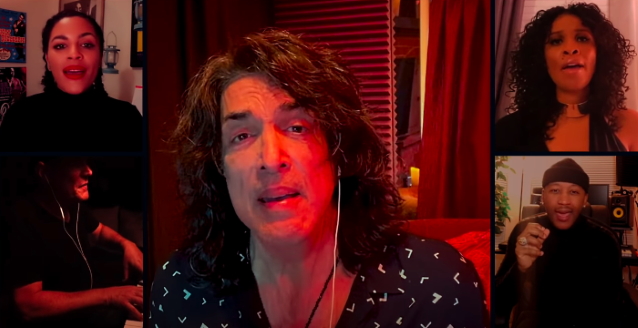 An official "socially distanced" performance music video for SOUL STATION's rendition can be seen below.

In a statement accompanying the clip, Stanley said: "These are challenging times. Long before I ever heard the great British bands, I grew up listening to Philly Soul, Motown and so much more. I was lucky to see Otis Redding and Solomon Burke among others. That music and its storytelling gave me strength and hope even in some tough days. The great classics of that era are magical medicine for most and I felt myself drawn back to that era for some sorcery I think we could all use."

SOUL STATION has spent the last couple of years working on its debut album.

Last year, Stanley told the Real Radio 104.1 radio station that he wanted to wait for the right time to release the SOUL STATION LP. "It really deserves full attention and my full commitment," he explained. "So until we can do great live performances — the band is amazing live — and until we can promote it the way we should, it's just going to simmer. But it's really just mind-blowing good. These are songs that, for one reason or another, have been relegated to samples on a rap tune. And I don't wanna hear background music for a rhyme — I wanna hear those songs.'

He continued: "This band is 13 people strong, and everybody's played with Smokey and Stevie [Wonder] and THE TEMPS [THE TEMPTATIONS] and Natalie Cole and Whitney Houston, and we knock those songs out of the park."

A couple of years ago, Stanley spoke to Rock Cellar Magazine about how the idea for SOUL STATION first came about. He said: "Well, my roots are much more broad and varied than some people might realize. This is funny; I was having tea with Jimmy Page in London and we were talking about this. I said, 'Before I ever saw [LED] ZEPPELIN or THE WHO or any of those bands, I saw Otis Redding. I saw Solomon Burke. I saw THE TEMPTATIONS.' So it's very much a part of my DNA. Motown and Philly soul and Stax/Volt, all that music is really, unfortunately too nostalgic at this point and used too often for loops and samples as opposed to hearing a great song. What's missing nowadays so much is great live performances of that material. What's being passed off now as R&B is usually a computer and a drum machine. For a while, I thought about that, and I had an opportunity a few years ago to put together something that was in essence SOUL STATION. We did a couple of private shows and we all looked at each other said, 'Why aren't we doing more of this?' It's great to have that coming from people who are not only in demand but working all the time with Stevie Wonder or Smokey [Robinson] or Pink or John Mayer. These are real crème de la creme players but everybody has the same passion for this music. To be able to recreate it, not in a sterile way but with the same passion and intensity that it was made with is something that we all feel very close to."

Asked what the greatest challenges are that he faces in delivering this material in a live setting, Paul told Rock Cellar Magazine: "There's a big weight on my shoulders because I'm singing songs by some legends, and if I can't deliver them, I shouldn't be doing them. So if I'm gonna sing Smokey or if I'm gonna sing Al Green or David Ruffin or Eddie Kendricks, you'd better be on-point or you shouldn't be doing it, plus the rest of the band is so damn good. They have played with Smokey, they've played with Stevie Wonder, with Natalie Cole, they've played with Whitney Houston and John Mayer and with Carlos Santana; I mean, the list goes on and on. For us all to be together as peers and be creating something this exciting, everybody on stage is smiling. We're all just caught up in the moment. To hear Crystal [Starr] sing 'I Want You Back' is just mind-boggling. Her dad was a backup singer for Jackie Wilson. Everybody's got their roots. From the get-go, anybody I ever called to be a part of this immediately said, 'I'm in!' just to have the opportunity to recreate and revive these songs; you don't get that chance."