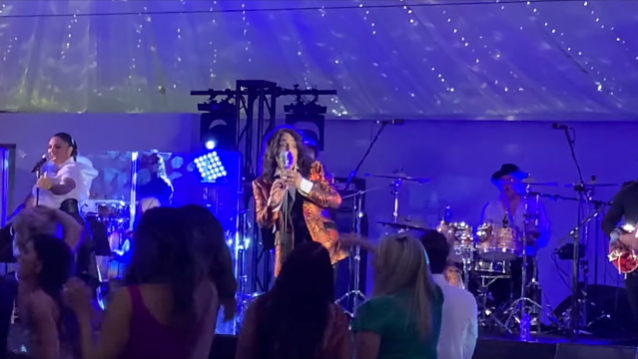 Santos is a lifelong music fan who operates the record label Blacklight Media, which he founded in 2016 in partnership with Metal Blade.

Draiman shared a couple of photos of him with Stanley on Twitter and he wrote: "Great to meet and talk a little shop with the legendary @PaulStanleyLive".

The debut album from SOUL STATION was released in March 2021 via Universal Music Enterprises. A collection of nine classic soul covers and five original tracks, "Now And Then" features the band's acclaimed version of THE FIVE STAIRSTEPS' "O-o-h Child" as well as SOUL STATION's take on THE SPINNERS' "Could It Be I'm Falling In Love".

THE wedding of the century

Last night was incredible!! Not only did we get to see two of our favorite people wed… but in Malibu, surrounded by…

Congratulations to Natalie & Chris Santos !!! We all love you both and wish you a lifetime of happiness. It was great to...

Congratulations Chris Santos and Natalie Makenna!What an amazing fairy tale wedding of an opera singer and the metal...

Posted by Anteros Entertainment on Monday, May 23, 2022

Posted by Charlie Benante Official on Monday, May 23, 2022

Great to meet and talk a little shop with the legendary @PaulStanleyLive 🙌🏻🤘🏻 pic.twitter.com/E0MasLOS8s