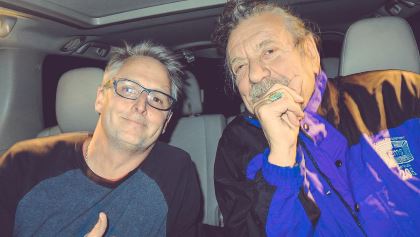 According to The Pulse Of Radio, PEARL JAM guitarist Mike McCready recently conducted interviews and released pictures of the chats with LED ZEPPELIN's Robert Plant and St. Vincent of SASQUATCH for Pearl Jam Radio.

McCready will also be featured on the "High In The Clouds" soundtrack with Lady Gaga and Paul McCartney, set for release sometime in 2016. The children's film, directed by "Cloudy With A Chance Of Meatballs 2"'s director Cody Cameron, focuses on two competing ways of life, Animalia and Megatropolis.

THE BEATLES legend McCartney co-authored the children's book titled "High In The Clouds", in 2005. He's brought the project to life by producing an animated film based on the book.

In addition to voicing one of the characters, McCartney has also written seven or eight new songs for the project.