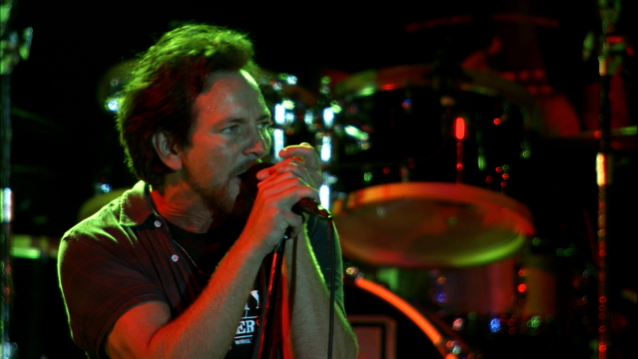 AXS TV turns back the clock this spring with a time capsule full of iconic bands that defined an era in the "Long Live The 90s" all-new weekly limited concert series — launching Sunday, May 9 at 9 p.m. ET/6 p.m. PT. The special event joins the network's "Sunday Night Rocks" lineup which also includes the star-studded music-themed countdown series "The Top Ten Revealed" at 8 p.m. ET, and the insightful profile series "A Year In Music", hosted by Grammy-winning HALESTORM frontwoman Lzzy Hale, at 8:30 p.m. ET. Both series premiere new seasons on May 9.

"Long Live The 90s" highlights seven influential bands whose sound helped shape one of music's most important decades. This curated collection of unforgettable concerts finds each band taking the stage to showcase their unprecedented staying power as they perform career-spanning timeless hits.

The series opens on May 9 with the PEARL JAM concert film "Let's Play Two", documenting the band's epic two-night stop at Wrigley Field. Set amidst the backdrop of the Cubs' historic 2016 season, "Let's Play Two" details the unique relationship between the band, the team, and the city, spurred by hometown hero Eddie Vedder, and captures PEARL JAM in peak form as they tear through signatures, including "Better Man", "Black" and "Jeremy", as well as legendary covers of Victoria Williams' "Crazy Mary" and THE BEATLES' "I've Got A Feeling". Other series highlights include GARBAGE rocking the Queen City of the Plains with an evening of signature hits including "Only Happy When It Rains", "Stupid Girl" and "I Think I'm Paranoid" in "Garbage: One Mile High… Live" (May 16); and STONE TEMPLE PILOTS storming into the Windy City for a frenetic set at the Riviera Theatre featuring "Plush", "Between The Lines" and "Creep" in "Stone Temple Pilots: Live In Chicago" (May 23).

"Long Live The 90s" is back in action on June 6 with alt-rock superstars JANE'S ADDICTION in a sideshow spectacle blending art with music as they performs "Jane Says", "Up The Beach", "Ocean Size" and "Mountain Song" with burlesque dancers, trapeze artists and more flying through the air in "Jane's Addiction: Live In NYC". Then, RAGE AGAINST THE MACHINE heads across the pond for a roaring showcase, performing hits such as "Testify", "Bulls On Parade" and "Killing In The Name" in "Rage Against The Machine - Live At Finsbury Park" (June 13). The event closes with a pair of "Live From The Artists Den" specials, as rock trailblazers THE BLACK CROWES fly South for a soaring set Oxford, Mississippi, performing "Shine Along". "She Talks To Angels" and "High Head Blues" (June 20); and Seattle legends SOUNDGARDEN wrap up their winter tour with a sold out show at the Wiltern Theatre in Los Angeles, performing a landmark set that includes "Rusty Cage", "Blind Dogs", "Black Hole Sun" and many more (June 27).

"Nostalgia is a powerful thing and these days, people are longing not only for a time when life was less complicated, but more imminently, for the day when we can get together to enjoy our favorite bands performing live again," said Sarah Weidman, head of original programming, development and multi-platform content for AXS TV. "From the fashion and music, to the toys and TV shows, the one era that people are constantly turning to is the 1990s. This curated concert series presents the ultimate trip down music's memory lane, taking viewers back to one of rock's most definitive decades with classic performances, iconic songs and groundbreaking bands that helped make the '90s so distinct. We are excited to be able to connect — and re-connect — viewers of all ages to these incredible events, giving them the best seat in the house for powerful sets packed with the classic hits they love."