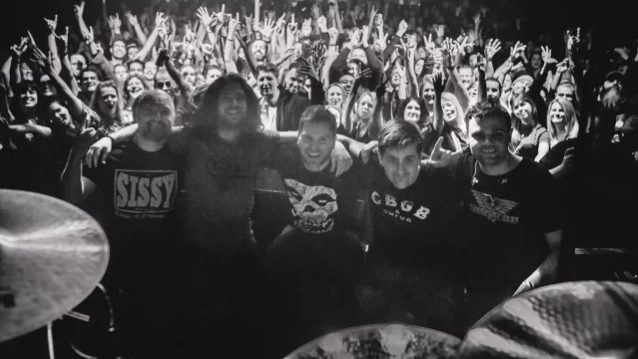 U.K. PEARL JAM tribute band PEARL JAMM has changed its name to LEGAL JAM after receiving a threatening letter from the Seattle group's lawyers. The cease-and-desist letter accused the tribute band of "damaging the PEARL JAM brand and causing confusion" among fans.

Earlier today, PEARL JAMM issued the following statement: "A name doesn't define us. We do what we do out of love and respect for PEARL JAM.

"We have always been clear that we will 'Yield' to PEARL JAM's demands and equally clear that our disappointment was only ever of the timing and manner in which those demands were made.

"We are proud to announce our new name: 'LEGAL JAM' which we thought would be fitting and under which we will continue to perform the music of PEARL JAM in the most heartfelt and authentic way.

"We look forward to reconnecting with our own fans (and other tributes) who have been so supportive through this as well welcoming the new fans who have joined us over the last week, as soon as we are back on the road."

LEGAL JAM bassist Richard Gaya told Louder that that they never objected to a name change at the request of PEARL JAM, but that they were surprised by the heavy-handed manner in which the Eddie Vedder-fronted outfit demanded the U.K. group's compliance.

"PEARL JAM has known about us for years," Gaya said. "They've been in touch with us specifically about the 2018 Borderline gig and never before voiced any concerns, but they wait for a global pandemic to get in touch with us, and they do so through aggressive solicitor letters, rather than reaching out to us personally.

"They have recently changed their manager. We don't know if that's relevant, but we have been told on several occasions — we have it in writing — that the band members are aware and have approved this action.

"PEARL JAM battled against Ticketmaster, they battled against Trump, if you look at the lyrics of their songs, they're anti-suicide, they've spoken about domestic violence, they've spoken about police brutality, all these social issues and now suddenly it's all — oh by the way, here's a legal letter. It's so out of keeping with PEARL JAM, and I think that's where the outrage comes from."

Because tribute band names are often a play on the original artist's name, which are valuable federally registered trademarks, using similar names and trading off the name, brand, images and reputation of the original act could be considered trademark infringement.

In 2010, lawyers for Universal Music in Sweden reportedly sent out legal notices to more than fifteen ABBA tribute acts demanding that they stop trading off the name "ABBA". A year earlier, the all-female BON JOVI tribute act BLONDE JOVI was contacted by BON JOVI's lawyer who insisted that the tribute act was diminishing the value of his client's brand and creating a "likelihood of confusion" between the two acts, and therefore demanded that they stop using the name immediately.

We appear to have set the internet on fire this week and it’s time to extinguish the flames. A name doesn’t define us....

To Eddie, Jeff, Stone, Mike, Matt, Boom; to Pearl Jam, you have broken our hearts.

You have known of our tribute band...