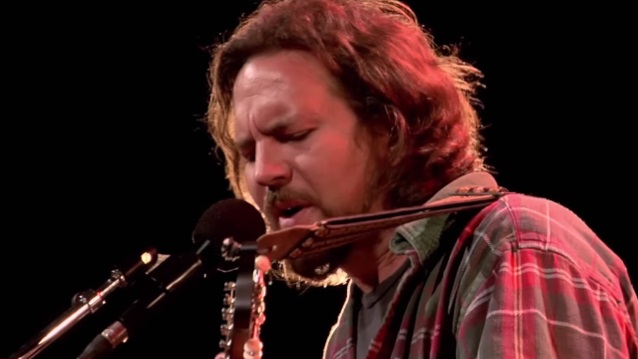 According to The Pulse Of Radio, PEARL JAM singer Eddie Vedder has come under fire for an impassioned anti-war speech he made in England on Friday night (July 11) that some fans interpreted as being aimed at Israel. Vedder's critics say that the artist has accused Israel of war-mongering in the current escalating military situation with Palestine. The Jerusalem Post called the speech an "anti-Israel diatribe" and printed reactions from fans in Israel, including rock radio DJ Ben Red, who was behind a campaign to get PEARL JAM to come perform in Israel but now has said, "Eddie Vedder, your true face is finally being revealed. You are invited not to come here. I personally do not want to see you, and I will erase the Facebook page calling on bringing (PEARL JAM) to Israel, but not before I expose who you really are."

The politically outspoken Vedder told The Pulse Of Radio a while back that he used to be reluctant to voice his opinion earlier in his career. "I've always been wary, you know, speaking from some kind of a podium as a singer in a rock band," he said. "First of all, I think it's ridiculous that it should be left to the singers of rock bands to have to bring up these issues. But then again, the arts are always going to reflect society, and there could be a responsibility there."

Vedder continued, "I swear to fucking God, there are people out there who are looking for a reason to kill! They're looking for a reason to go across borders and take over land that doesn't belong to them. They should get the fuck out, and mind their own fucking business... Everyone wants the same goddamn thing: to have our children, eat, procreate, draw a painting, make some art, listen to music, fuck some more, have another baby, eat, work, eat, work, love, love, love, everyone's the fuckin' same! So why are people at war? Stop the fucking shit, now! Now! Now! We don't want to give them our money. We don't want to give them our taxes to drop bombs on children! Now! No more! Now!"

Vedder then dropped to his knees to beg for peace, leading the audience in a rendition of Edwin Starr's "War".

Fans have both defended and attacked Vedder on his Facebook page.

The band does not perform again until this fall, when it kicks off a North American tour on October 1 in Cincinnati.