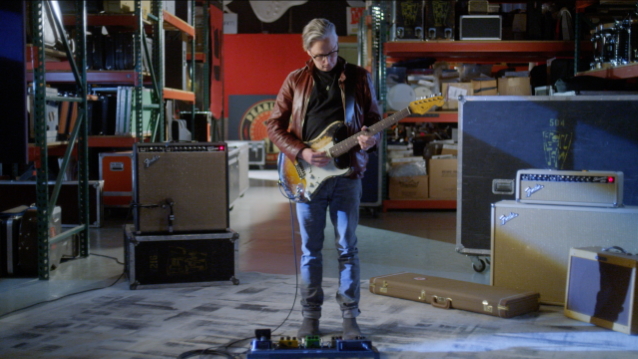 Fender Musical Instruments Corporation (FMIC) and the Fender Custom Shop have announced the limited-edition Mike McCready 1960 Stratocaster in the artist's first-time collaboration with the iconic guitar brand. The Rock And Roll Hall Of Fame inductee partnered with one of Fender's world-renowned master builders, Vincent Van Trigt, to disassemble his famous vintage Stratocaster in order to account for every spec, detail and iconic scratch.

With 2021 marking the 30th anniversary of PEARL JAM's debut album, "Ten", the limited 60-piece run celebrates the impact of the legendary rock band. The collector's edition promises PEARL JAM fans a nearly exact replica of the guitar McCready has used to wow audiences for decades.

"Once I could afford a quality guitar, I immediately went for the vintage Stratocaster. It was my dream guitar because of my love for Stevie Ray Vaughan, and as my musical aspirations were coming true I had to have it," said Mike McCready. "It was the first significant guitar that I bought, never thinking I could ever own one before PEARL JAM happened. My favorite feature is the playability of the neck. It's so worn in and easy to play. It's got the best neck and fretboard of any of my guitars. I also love how light it is. I actually picked up the prototype thinking it was the original a couple of times which shows me how meticulous and caring master builder Vincent Van Trigt and the whole Fender team has been throughout this process."

McCready's purchase of the original vintage guitar was inspired by his idol, wanting to get his hands on Vaughan's 1959 Stratocaster. His love for the model went so far as getting the year memorialized with a tattoo on his wrist. In deconstructing the guitar, Van Trigt uncovered a long-held secret kept from McCready — his beloved '59 Strat was actually constructed in 1960. It was discovered decades ago by PEARL JAM's longtime luthier after working on the guitar and finding date stamps on the neck. Recognizing McCready's pride in the specific model, the luthier and PEARL JAM's equipment manager let him believe for 28 years that it was built in 1959, only revealing the secret in order to create the perfect Fender guitar replica.

"It was an honor to deconstruct and recreate Mike's vintage 1960 Stratocaster," said Van Trigt. "He plays an esteemed model, and the unique story behind its history gives even more character to the road-worn guitar we aimed to recreate."

Complete with a lacquer finish, flat-sawn flame maple neck and flat-lam rosewood fingerboard with 21 vintage frets, the well-loved guitar became a centerpiece for McCready's iconic solos on tour and was used to record classic PEARL JAM hits like "Daughter", "In My Tree", "Nothing As It Seems", and "Superblood Wolfmoon". The custom hand-wound pickups wound by Josefina Campos herself, "treble bleed" tone capacitor and synchronized tremolo with Callaham bridge block allow for McCready's signature blues and classic rock sounds to shine through, inspired by his music idols like Jimi Hendrix, Pete Townshend and Keith Richards.

"Mike McCready is a bonafide rock n' roll legend, and it was a privilege to recreate his all-time favorite guitar," said Mike Lewis, VP of product development at Fender's Custom Shop. "When considering the partnership, we knew we had to get Vincent Van Trigt on the case. He worked on the Vaughan brothers 30th-anniversary Strat set, so he was the natural choice to create an exact copy of Mike's time-worn Strat for his fans to collect and enjoy.

"PEARL JAM has been inspiring us at Fender, and not to mention audiences around the world for 30 years, and we couldn't think of a better way to honor the legacy of this legendary rock guitarist."

The Fender Custom Shop limited artist series celebrates the storied guitars of legendary musicians by building recreations of their instruments in exacting detail. Based on close examination of the original guitars, every nuance is noted and incorporated into the build. Reverse-engineering the model, vintage, wood, hardware, electronics, finish and player customizations are all vital to the process. Most importantly, the player's wear patterns are recorded: every nick, scratch, gouge and bump are vital to the authenticity of the recreation — they are mapped and documented with precision.