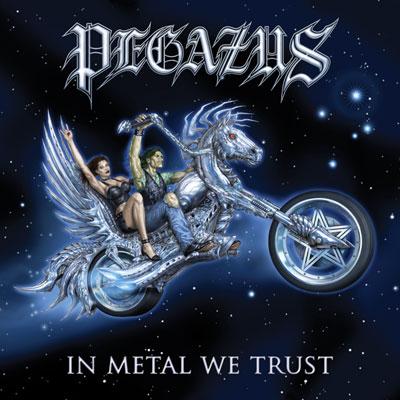 An audio sample of PEGAZUS' cover version of the JUDAS PRIEST classic "Metal Gods" can be streamed below. The track comes off the group's first studio album in nine years, "In Metal We Trust", which will be released on April 15 through Black Leather Records (with distribution from Twilight Vertrieb). According to a press release, the CD contains "11 brand new classic heavy metal songs with original singer Justin Fleming back on vocals! As a tribute to the great guitarists of the '80s, PEGAZUS has invited Ross The Boss (MANOWAR, ROSS THE BOSS, THE DICTATORS),Jeff Watson (NIGHT RANGER, MOTHER'S ARMY) and David Shankle (MANOWAR, DSG) to contribute a solo to the song "Old Skool Metal Dayz".

"In Metal We Trust" track listing :

"Haunting Me", the new video from PEGAZUS, can be viewed below. The clip was filmed on location in Melbourne, Australia and directed by Aaron McLoughlin and Judd Hyland.

Commented PEGAZUS founding member and guitarist Johnny Stoj: "The 'Haunting Me' video shoot was personally my best experience ever with making a music video.

"It was so awesome working with film director Aaron McLoughlin and such a professional crew."

Vocalist Justin Fleming on his return to PEGAZUS: "When I got the call from the band, I was, of course, shocked about Rob's departure, but felt honored to be asked to come back into the band. Since then it's been a blast. We have played a lot of great shows, including the SKID ROW tour, and then the recording of 'In Metal We Trust'.

"I think the album will shock a lot of people with the strength and power of the songs. We put all our heart into this album, there are no filler songs and from start to finish 'In Metal We Trust' kicks serious ass!

"The upcoming tour is going to be awesome; we really can't wait to hit the road to meet and bring the PEGAZUS live show to our fans all around the world. It's been far too long since the band has been over to Europe and I'm pumped to get on stage and put on a show the PEGAZUS warriors will never forget."