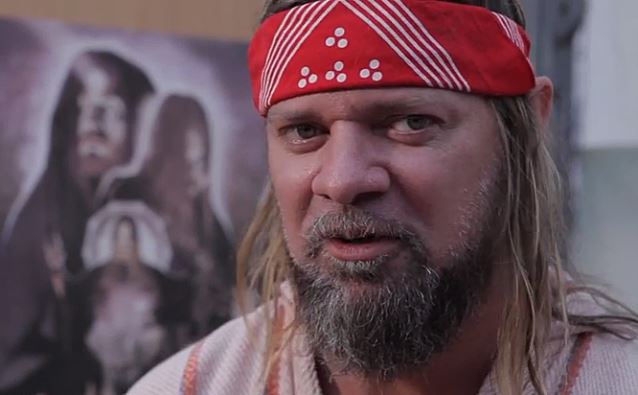 On October 1, Metal Hammer editor Alexander Milas conducted an interview with DOWN guitarist Pepper Keenan for the "Metal Hammer" radio show on TeamRock Radio. You can listen to the chat using the SoundCloud player below.

DOWN will enter singer Philip Anselmo's New Orleans studio, Nodferatu's Lair, on Monday, October 7 to begin recording a new EP that is tentatively due in early 2014.

Speaking about the band's new material, Pepper said: "It's kind of slight continuation of the first EP, but it's a little bit more… It's hard to say, man… It's more… I wouldn't say 'aggressive,' but it's definitely got some freaky guitar stuff on it. And it's definitely got a pretty good groove factor. And we spent a lot of time trying to make all the songs [fit together stylistically]. We had several songs that didn't quite match it, so we kind of [set them aside] and we're gonna move them to another EP. But it's got a super-heavy vibe to it, man. I mean, I'm really excited about it. Everybody in the band is excited about it."

He continued: "We wrote it kind of like we did the 'NOLA' record. Each one of us had some riffs and we got in a room and we just hashed it out like the old days — just going off each person's experiences and ideas. Everybody's ideas were valid, and it really ended up being well rounded and slamming. It was [a] very creative [process], let's put it that way. Actually, it was surprising some of us how much we really still got it."

Pepper also spoke about the cover theme for the next DOWN EP and how it will be connected to last year's "Down IV Part I - The Purple EP".

"When the second [EP] comes out, you'll see it as being an extension of the last cover," Pepper said. "So number 2 is gonna connect sideways to number 1, and you'll start to see a morphing kind of process. There's some kind of liquid light kind of thing that's kind of melding across as you go… I hate to quote the overall color, but I believe it's something like orange. I haven't looked at it in a while. It might not be orange yet, but it's heading in that direction."

Guitarist Kirk Windstein recently exited DOWN in order to focus "100%" on his other band, CROWBAR. He has since been replaced in DOWN by the band's longtime stage manager and HONKY founding guitarist Bobby Landgraf.

Released in September 2012, "Down IV Part I - The Purple EP" was DOWN's first in a series of four EPs to be released over the next few years (with a year between EPs),each touching on a different aspect of the band's sound.

"Down IV Part I" sold 12,000 copies in the United States in its first week of release to debut at position No. 35 on The Billboard 200 chart.