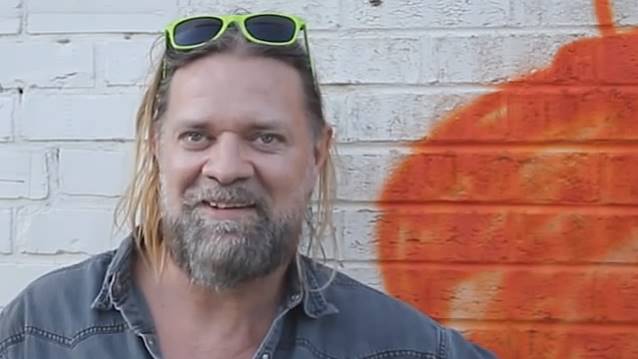 During an interview with TeamRock at this weekend's Bloodstock Open Air festival in the United Kingdom, DOWN guitarist Pepper Keenan spoke about his current status with CORROSION OF CONFORMITY and whether he ever plans on doing anything with that band ever again.

Keenan is still considered to be a member of CORROSION OF CONFORMITY but is not involved in the reunion of C.O.C.'s "Animosity" lineup, which was resurrected in 2010 and has been recording and touring ever since.

Pepper told TeamRock: "The old C.O.C. thing's been coming up a lot. We're talking to Reed [Mullin, drums] and Woody [Weatherman, guitar] about getting that going.

"That's going to take a lot of attention. We're talking about just going to Europe and playing shows as the 'Deliverance' four-piece, and starting from there to get it back together."

Back in May, Keenan told the Lubbock, Texas radio station 94.5 FMX about a possible reunion with CORROSION OF CONFORMITY: "The C.O.C. thing is still a pretty big part of my life and a big part of where I came from and how I got here. So the questions always come up all the time [about whether I will do something with C.O.C. again]. We are getting closer to solving that. Everybody is talking. We've had offers from a lot of different promoters all over the place. It's just a matter of [finding the] time [to do it right], you know, and not doing it half-assed. It has to be real. I'm not gonna jump into it for a paycheck. We all talk and we wanna get together and start writing and see what happens."

In a 2012 interview with Blistering.com, CORROSION OF CONFORMITY bassist/vocalist Mike Dean was asked if the band will ever do anything with Pepper again. "There's no firm plans, but there is a firm desire to make it happen," he said. "We had a really good time doing 'In The Arms Of God' and I'm really proud of that album. The only thing missing was Reed. I thought Stanton Moore did a great job… I came away from that thinking that if we had this level of creativity and also had Mullin… that would be a bonus. But yeah, I hope we don't just get that lineup together for shows or 'Deliverance' nostalgia shows, but get it together with the idea of putting out a record."

CORROSION OF CONFORMITY's most recent studio album with Keenan, "In the Arms of God", came out in 2005 on Sanctuary Records.

C.O.C.'s reunited "Animosity" lineup released its new album, "IX", on July 1 via Candlelight Records. The CD was produced by the band and longtime comrade John Custer.

Fan-filmed video footage of DOWN performing the CORROSION OF CONFORMITY classic "Albatross" on May 9 at the Starland Ballroom in Sayreville, New Jersey can be seen below.