Washington D.C.-based prog innovators PERIPHERY return this summer with a new album, "Periphery III: Select Difficulty", due out on July 22 via Sumerian Records, and a U.S. tour, dubbed the "Sonic Unrest" tour, which launches on August 4.

"For the past couple of years we've been refining our collaborative process as a band and we feel that it's only getting better with the completion of this album.

"We spent two months writing songs that are not only representative of the PERIPHERY sound but also reflect where all of us are as musicians, working together has helped us tread new ground musically and creatively.

"In support of 'Periphery III', you'll see us hit the road in the States this summer with SIKTH, CHON and TOOTHGRINDER on the 'Sonic Unrest' tour. It's going to be a blast! See you on the road!"

PERIPHERY's own Adam "Nolly" Getgood oversaw production for the album as he did with the "Juggernaut" releases. Nolly will no longer be a touring member of PERIPHERY, as he will be expanding his production work in his native U.K. He remains an integral part, and a member, of PERIPHERY. At this time no decision has been made about a touring bassist.

The "Sonic Unrest" tour, a month-long outing, sponsored by D'Addario and Guitar Center, includes openers SIKTH, CHON and TOOTHGRINDER and kicks off on August 4 in Raleigh, North Carolina.

A special BLABBERMOUTH.NET presale for select dates (denoted by * below) will take place on Wednesday, April 27 from 10:00 a.m. until Thursday, April 28 at 10:00 p.m. local time. When prompted, type in the presale code "BLABBERMOUTH" to access tickets before the general public.

Tickets to the general public are on sale this Friday at 10 a.m. local time. VIP packages, which feature a private meet-and-greet with the band as well as a limited-edition, exclusive poster, are available simultaneously via Periphery.net. 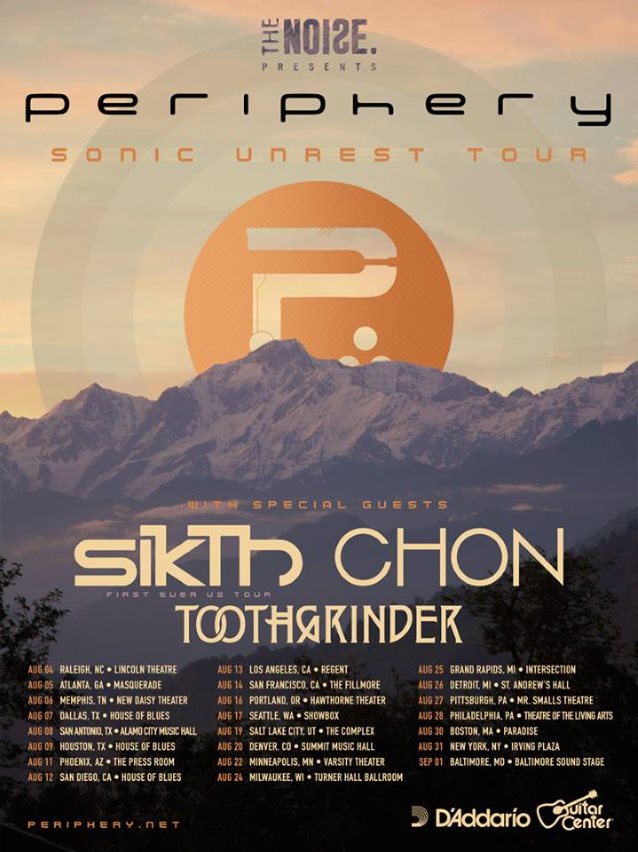