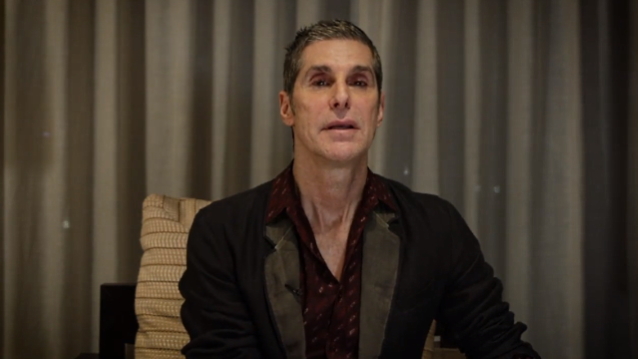 PERRY FARRELL Pays Tribute To His 'Best Friend' TAYLOR HAWKINS: 'One Of The Most Passionate Drummers I've Ever Seen'

Perry Farrell has shared a video tribute to his "best friend" Taylor Hawkins who died last Friday (March 25) at the age of 50.

The JANE'S ADDICTION frontman and Lollapalooza founder recorded the message on Saturday and had it played at the Lollapalooza Brasil festival, where the FOO FIGHTERS were the scheduled headliners on Sunday.

In the five-minute video, which can be seen below, Farrell states (as transcribed by BLABBERMOUTH.NET): "Taylor Hawkins died yesterday. He was my best friend — beloved in my home by my wife, my children, even my dogs. Whenever Taylor came over, we would make music in the den, [my dog] Cloud would always go and sit right by him. He was one of the most passionate drummers I've ever seen in my lifetime. When I think of him, I sum it up with one word: velocity. He had the gift to maintain a confident, striking and stroking velocity on drums.

"There's a large part of my heart that I had reserved for him. I accepted him into my heart when we became friends because he was such a pure guy, so pure of heart. I would receive texts from Taylor. They were always bits and pieces of songs he was writing or looking to write or wanted me to listen to. I got music tidbits as often as I got 'I love you's. We would always start with a song; there was always a song that… Like, 'Do you listen to YES? The guy kind of sounds like you.' And I say, 'Yeah, yeah. I like YES.' He just was obsessed with music and great songs. My passion for music, that's what's our common ground; our friendship was based around that. Then we got to know each other. He would tell me stories of going to JANE'S shows back in the '80s — shows that were pretty underground. So although I didn't make his acquaintance back then, we shared a history. It's almost like the rites of passage. We were young men and we were trying to be great musicians. Little did he know through this one fatal night, he would cement himself in the legends of music for all time. And that's what I think he deserves.

"The only sense that I can make of the tragedy is to know that Taylor's now in heaven; he can hear us. What I'm gonna do from this day forward is to try to make music that I think Taylor would really love."

Hawkins died at a hotel in Bogota, Colombia. Local officials said an ambulance was sent to the hotel after a man reported having chest pains. The 50-year-old FOO FIGHTERS drummer did not respond to resuscitation efforts and was declared dead, the city's health department said.