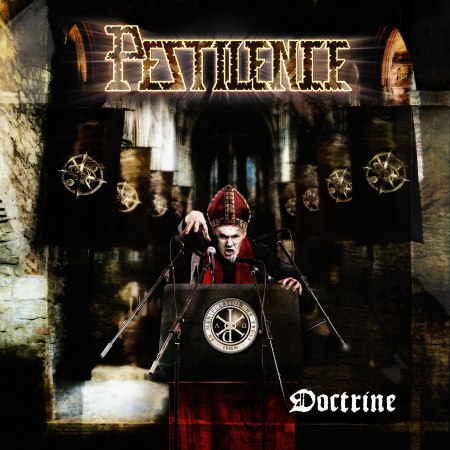 "Sinister", a brand new song from the Dutch death metallers PESTILENCE, can be streamed below. The track comes off the band's new album, "Doctrine", which will be released late April through Mascot Records. The eleven-track CD was recorded and mixed at Woodshed Studio in southern Germany with engineer Victor Bullok (TRIPTYKON, DARK FORTRESS).

Regarding the direction of the band's new music, PESTILENCE guitarist/vocalist Patrick Mameli previously stated, "The new material will sound, again, way different from the previous albums, and is going to top all previous PESTILENCE material, stated by insiders already.

"The new songs have the rawness of [1989's] 'Consuming Impulse', the theatrical [quality] of 1991's 'Testimony Of The Ancients' and the brutallity of [2009's comeback effort] 'Resurrection Macabre'. But this time we will try to top all our material by using the RG2228-GK [Ibanez guitar]."

The "Doctrine" artwork, which was designed by Marko Saarelainen, can be viewed below.