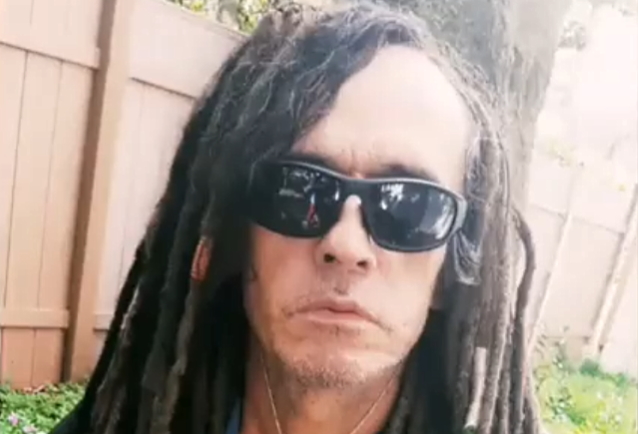 Former MORBID ANGEL drummer Pedro "Pete" Sandoval has released an Instagram video in which he addresses some of the most commonly asked questions regarding his time with the legendary extreme metal outfit.

In the two-minute clip, which can be seen below, Sandoval — who was forced to leave MORBID ANGEL in 2010 after undergoing surgery for a prolapsed disc — says: "I'm here to ask you for a very special favor. I have received many questions, and I have been tagged in many posts and videos, MORBID ANGEL photos and stuff, and I've been asked about who's my favorite singer or which era is my favorite one — the era with David Vincent or with Steve Tucker. Well, I wanna tell you that I love both eras. I had fun. I had a great time working with David Vincent, and I had a great time working with Steve Tucker as well. So, from 'Altars Of Madness' [1989] to 'Heretic' [2003], they're all masterpieces for me. We worked hard [on] those albums. So I'm telling you my answer that I don't have a favorite album, I don't have a favorite era, I don't have a favorite singer — I love 'em all. I had a great time in both eras with every album.

"[On] this site, please, I don't wanna promote hate, arguments," he continued. "This site is to promote my music, the things that I use for my music and help animals and stuff."

Sandoval, who now lives his life as a born-again Christian, added: "And as far as the album released in 2011" — referring to MORBID ANGEL's controversial "Illud Divinum Insanus" LP — "please don't ask me any questions about it, because I have no comments about it — no comments at all, man. I stay what I am, I did what I did, and I am so happy and grateful that I did what I did with these guys."

Former MORBID ANGEL bassist/vocalist David Vincent told Invisible Oranges in a December 2013 interview that "Pete has found Jesus," which meant that Sandoval and MORBID ANGEL were no longer "compatible."

Sandoval is continuing to record and tour with TERRORIZER, whose latest studio album, "Caustic Attack", was released in October 2018 via The End Records.