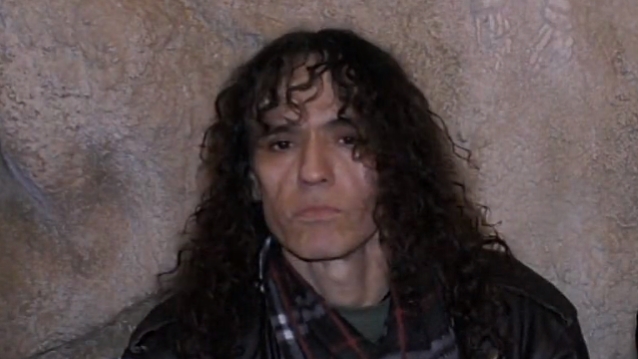 Austrian webzine Stormbringer conducted an interview with guitarist Lee Harrison and drummer Pete Sandoval of American grindcore icons TERRORIZER prior to their January 15 show at Viper Room in Wien, Austria. You can watch the entire chat below. A few excerpts follow (transcribed by BLABBERMOUTH.NET).

On whether Sandoval thought the band's "World Downfall" debut would have such staying power 30 years after its release:

Pete: "Never, never, never, never. It's something that we just think it's phenomenal, it's great. We're just following along and that's why we're here, to continue this legacy and we can push it and move it forward. Plus, we got new music going on with it and mix that with 'World Downfall'. It's great. I think it's a great new beginning. Yes, especially with this killer new album we did with Lee and Sam [Molina, bass/vocals]."

On Sandoval's back issues around the time 2012's "Hordes Of Zombies" was released:

Pete: "I wasn't prepared, actually, to come back when we did 'Hordes Of Zombies'. That was the reason why there was no shows or anything. It was, like, 'Come on, we did 'Hordes Of Zombies' with this other lineup which doesn't exist now, obviously. Then we didn't do anything.' So, what are people supposed to think? What happened to them? What do you think? Why don't they tour? The thing is, I wasn't prepared to tour because I was still recovering from back surgery. I wasn't even thinking about coming back. To be honest with you, I was ready to retire. I barely did the 2012 'Hordes Of Zombies'. I barely went through with it and I did it. I said 'I'm done. I can't even play these songs live.' But at the end of 2013, I met with Lee and we met at some place. We said, 'Hey, let's start jamming more TERRORIZER tunes. I know the songs on the guitar.' We started jamming about five songs. It turned out he knew all the albums. That's how the whole beginning in 2013, 2014, I went, 'Wow, I can do TERRORIZER.' It's not so much like MORBID with so much double bass. That's what ruined my back in the beginning. I go, 'Why not?' I'm a one-footed blaster. That's what TERRORIZER does. Therefore, that was a great beginning with Lee Harrison and then Sam, obviously, completing the team."

On whether TERRORIZER now feels like a regular band instead of a project:

Pete: "We won't take six years either [to release another studio album]. We can do it in two years and not wait six years. The second album, 'Darker Days [Ahead]', there was 17 years. We're not going to wait that long, do you know what I mean?"

Pete: "At the time, it was necessary. During those years, there was no Internet. When was that? Early in the '80s? Come on, '85, '86, '87, we started in '86, '87 when we did those demos. Then, the trade trading. He [deceased TERRORIZER guitarist Jesse Pintado] had a lot of friends all around the world, fanzines and all kind of friends he used to trade tapes with and that's how TERRORIZER was starting to become known in the underground, but still in L.A., we meant nothing. We weren't getting signed; no labels were interested in that kind of music. Back then in 1986, '87, come on, even death metal wasn't really born yet. It was starting to come out and grindcore like REPULSION, those bands were very underground music. In other words, we didn't have a future over there in L.A. All we could do is do shows in L.A., parties, house shows, house parties, pretty much, but that was in backyards. They still do those in L.A. We couldn't get out of L.A. That was the main reason I had to move to Florida for MORBID ANGEL in July 1988 because TERRORIZER wasn't doing much back then."

On whether MORBID ANGEL leader Trey Azagthoth was ever jealous of TERRORIZER:

Pete: "No. I don't know, but Trey mentioned many times when I was in the band, in MORBID, through all the years, that he would love to do TERRORIZER stuff because some of the MORBID shows back in the day, I think 'Covenant' or 'Domination', I can't remember. 'Blessed Are The Sick' or 'Covenant', we did the song 'Dead Shall Rise'. MORBID ANGEL played the song many times in the United States. I don't know if we did in Europe, but in the United States we did it for several tours. Trey always wanted to play that kind of thing, but his band was always MORBID ANGEL. He was always busy with MORBID ANGEL. He was so busy and every album took so long and so many years. That was a band that took forever to write an album."

On whether he has a relationship with Azagthoth or the current members of MORBID ANGEL:

Pete: "I don't even speak to them. I'm not enemies [with them]. They do their lives. They mind their own lives and they mind my own. They don't contact me and I don't contact them. That's the way it is."